In what may have been a fitting ending to a pandemic-plagued season, hundreds of maskless Alabama fans flooded the streets in Tuscaloosa after the Crimson Tide won the College Football Playoff National Championship on Monday night in Miami.

Videos shared to social media shows a sea of fans ignoring social distancing to celebrate on the streets of the team's hometown after the school officially claimed its 18th national title.

The Crimson Tide's 52-24 win over the Ohio State Buckeyes in Miami was played in front of a crowd of 15,000 socially-distanced fans after nearly 130 games were cancelled or postponed in 2020.

The odds had always favored the top-ranked Crimson Tide, which finished a 13-0 season with another in a series of dominant performances.

'With COVID and everything going on, it just made things tougher, and made us more together as a team, being here for each other, keeping our bubble small,' Smith told ESPN after his memorable season. 'The discipline on this team is like no other.'

As many teams were this season, the Buckeyes were shorthanded on Monday because four players tested positive for COVID-19 before the game. 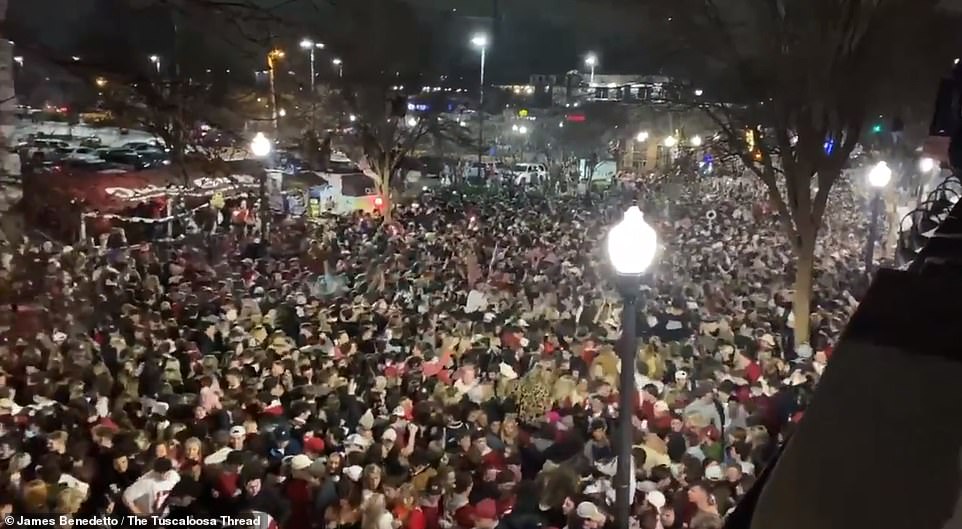 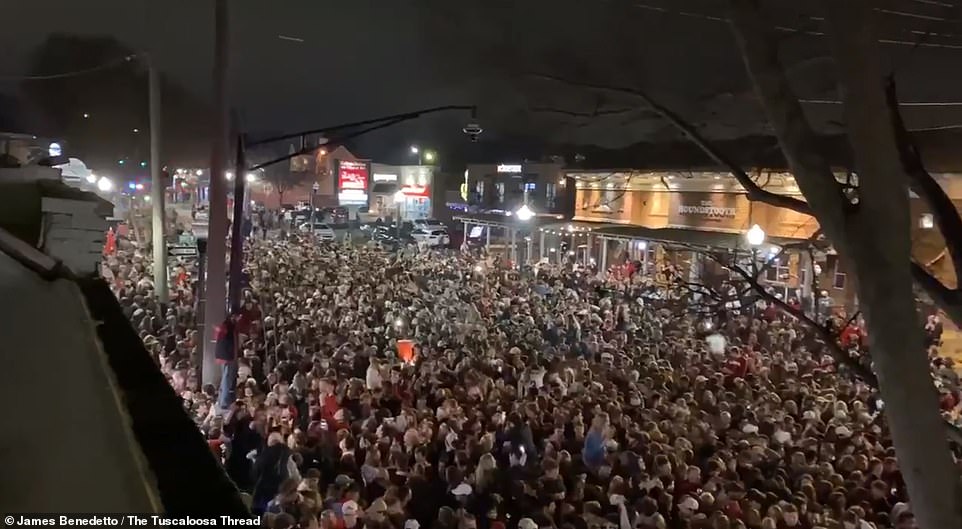 A sea of fans: People ignored social-distancing to celebrate the win as they packed the streets of Tuscaloosa 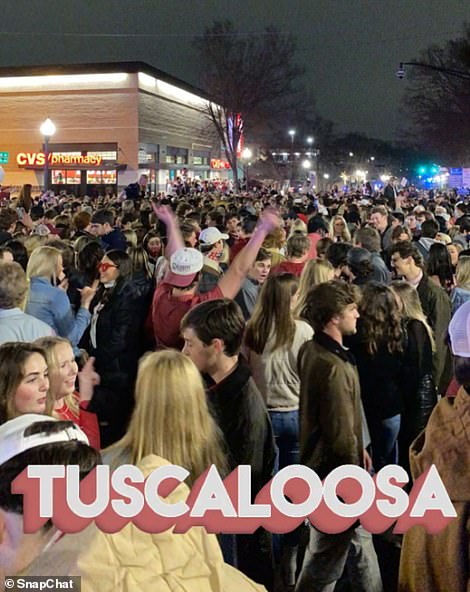 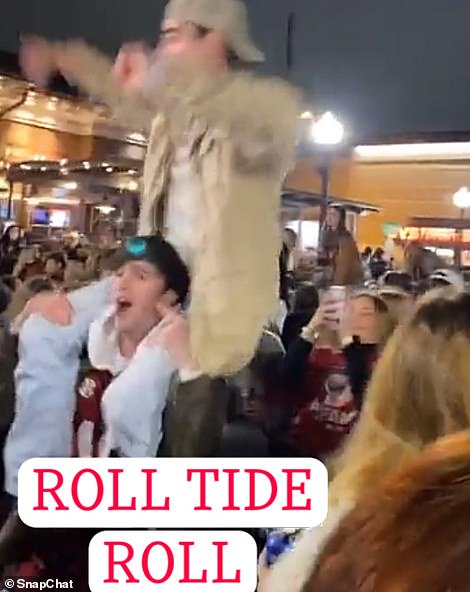 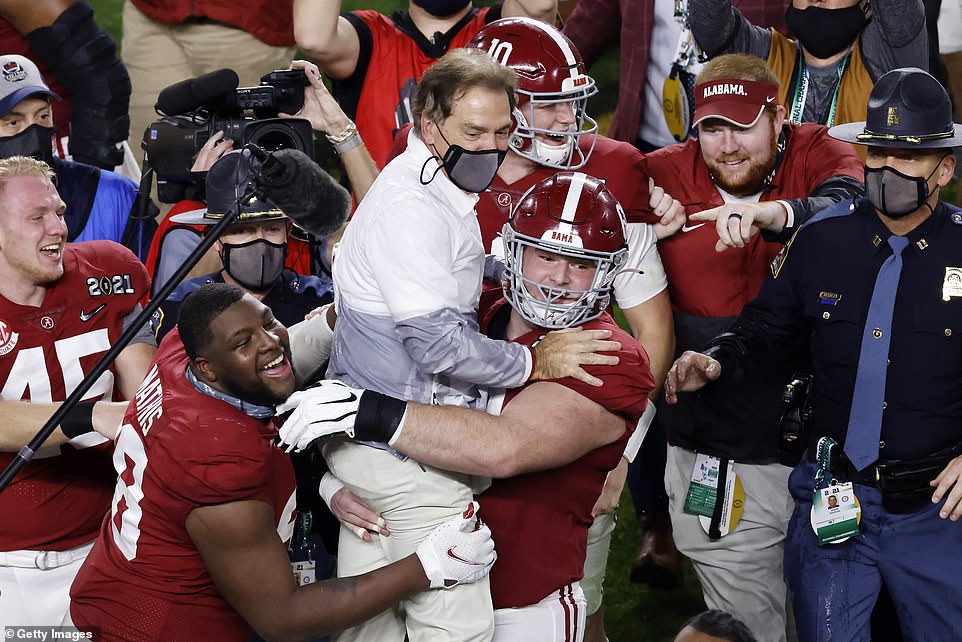 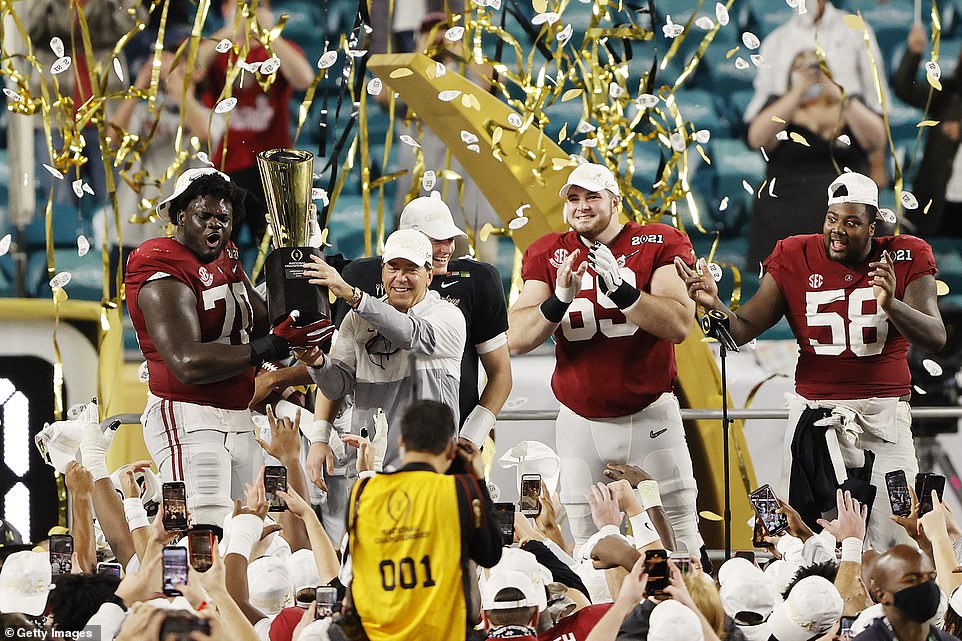 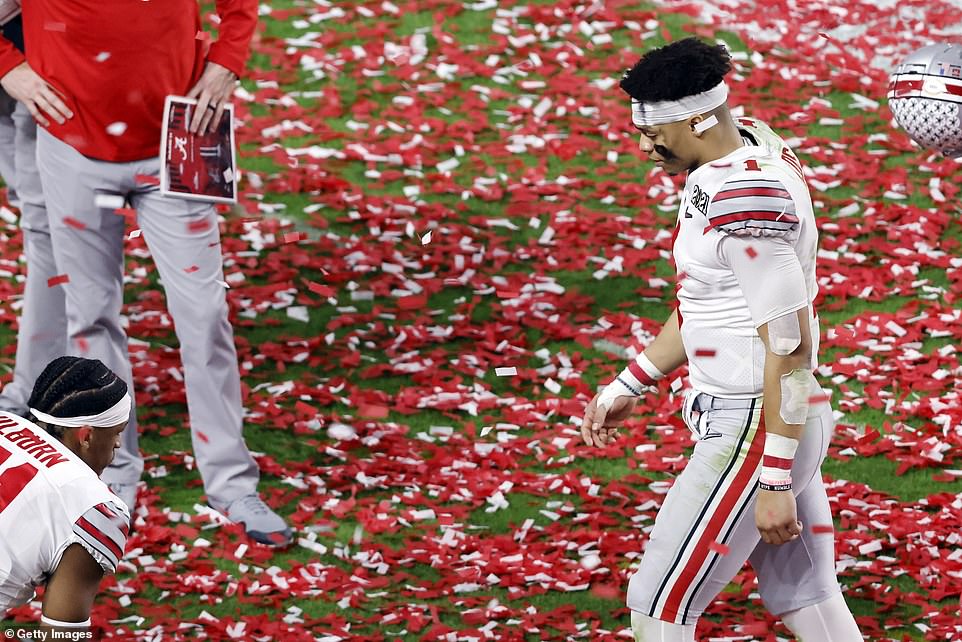 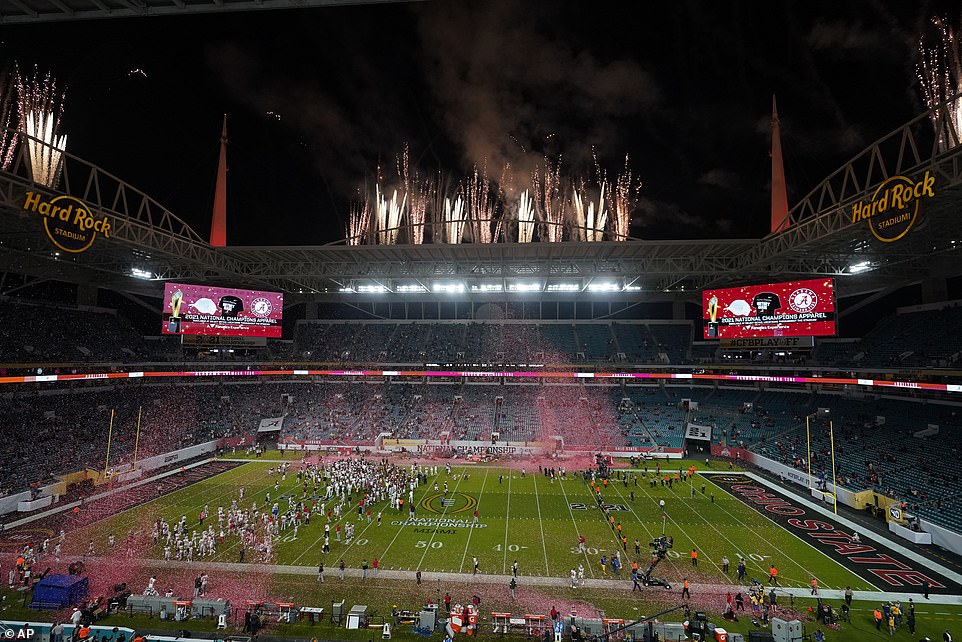 The game was played in front of 15,000 socially distanced fans in Miami due to COVID-19 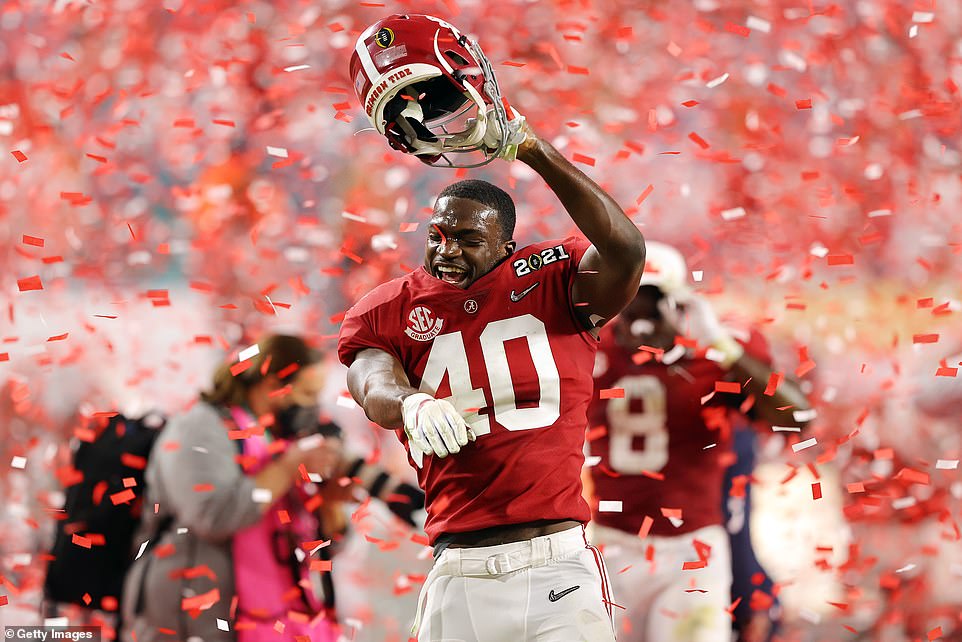 The perils of the 2020 season were nothing new for OSU and coach Ryan Day.

Back in August, the Buckeyes faced the prospect of no fall football at all when the Big Ten postponed its season, only to reverse course in October.

Then, due to three pandemic-related cancellations, Ohio State was limited to just five games on the regular season, and was nearly barred from postseason participation.

Alabama, on the other hand, had only one game postponed this season, though it was also because of COVID-19 issues with LSU.

Saban, meanwhile, had the bad fortune to test positive for the virus - twice: the first time it was deemed a false positive after further testing and he was able to coach against Georgia; the second time he had to miss the Iron Bowl against arch rival Auburn. 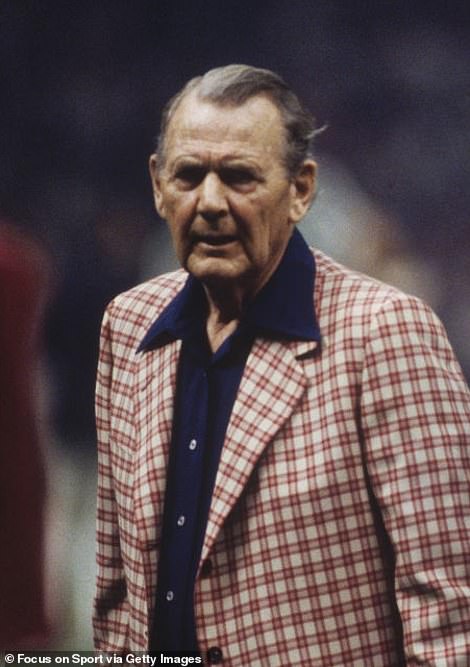 With the win, Saban passed Alabama legend Paul 'Bear' Bryant (pictured) with his seventh national title - the most of any coach

From start to finish, the specter of COVID-19 loomed large over the 2020 college football season and the national championship game was no exception.

Along with masks for almost everyone except the players, there were lots of empty seats - around 50,000 - for the College Football Playoff showdown. The game, played in the Miami Dolphins' stadium, drew the sort of turnout typically found in the fourth quarter of an NFL preseason game.

For sports fans, the odd atmosphere has become frustratingly familiar - the Lakers, Lightning and Dodgers all won championships in mostly empty venues.

But the challenges college football faced in navigating the pandemic were unique. Many were pessimistic the season would ever reach the finish line when it began August 29 with the Guardian Kickoff Classic between Austin Peay and Central Arkansas, a game attended by hundreds.

Nearly 130 subsequent Bowl Subdivision games were postponed or canceled after that and every week seemed to bring a headache or a twist tied to the coronavirus. Players around the country endured frequent testing as they tried to avoid campus outbreaks of the virus, with mixed success.

The Pac-12 and Big Ten postponed their seasons before reversing course, and Ohio State played only eight games. Alabama made it to the Rose Bowl, which because of the pandemic was played in Texas.

Fittingly, the championship game took place at a COVID-19 vaccination and testing site. Ohio State was without 13 players, and while the school didn't give a reason, Day acknowledged last week the Buckeyes were dealing with new cases of the virus.

The audience around the country was huge, however, as sports again offered a diversion and some semblance of normalcy. It was a made-for-TV season that ends with an asterisk, and college football now looks toward the 2021 season, which is a big question mark. 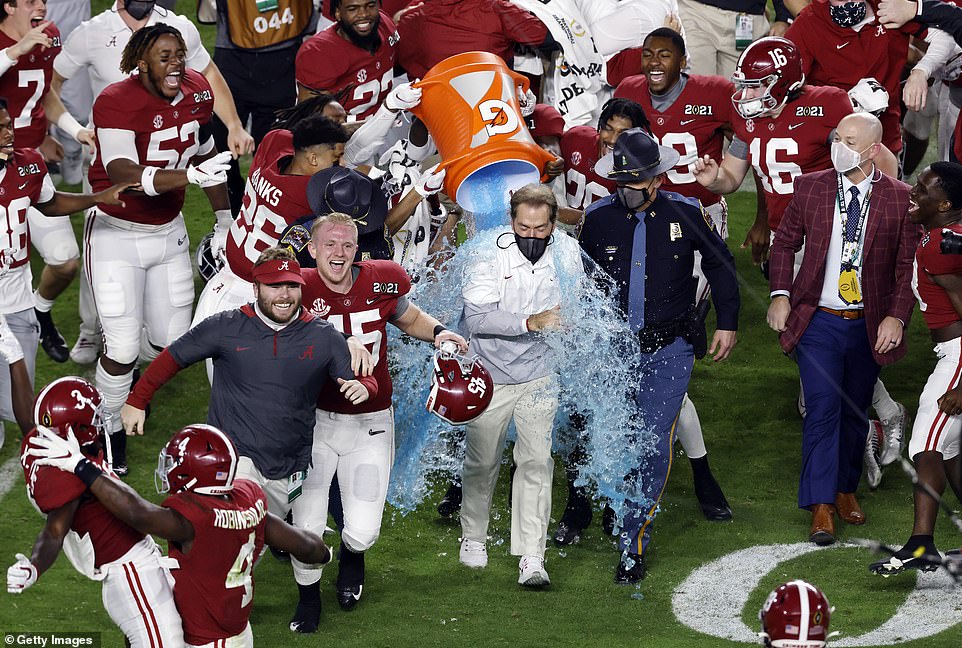 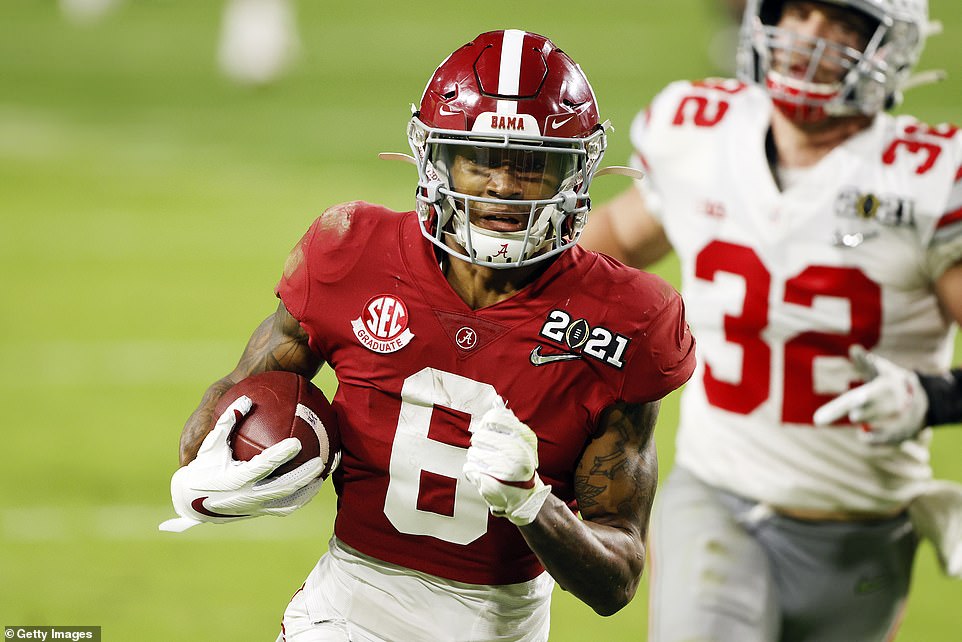 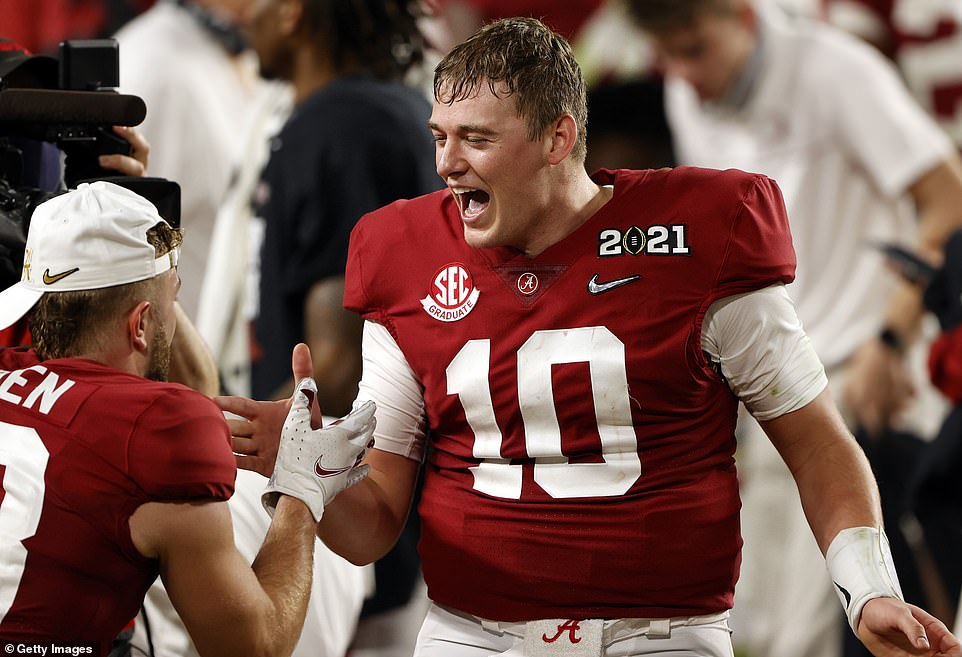 And on the field itself, Ohio State (7-1) just couldn't keep up.

Quarterback Justin Fields, playing what might be his last game before heading to the NFL, passed for 194 yards and a touchdown. Whether Fields was 100 percent after taking a brutal hit to the side during his brilliant semifinal performance against Clemson was hard to know for sure.

On the Buckeyes' first drive, they lost star running back Trey Sermon to an injury and in a game they needed to be running at top speed, facing one of great offenses in recent history, they sputtered too much. Ohio State has never allowed more points in a bowl game.

'To me this is the ultimate team,' Saban said. 'There is more togetherness on this team than on almost any team we've ever had. They've had to overcome and to persevere so much through this season, and they have done it magnificently.'

Fans can debate which team in the Saban dynasty is best, but none will be more memorable than this group. The Tide finished perfect during a season that could not have been further from it as COVID-19 forced teams into quarantines and endless testing and uncertainty every single week with games played in mostly empty stadiums.

Only about 15,000 fans were at Hard Rock Stadium, capacity 65,326, to see the last magnificent performance of Smith's college career. 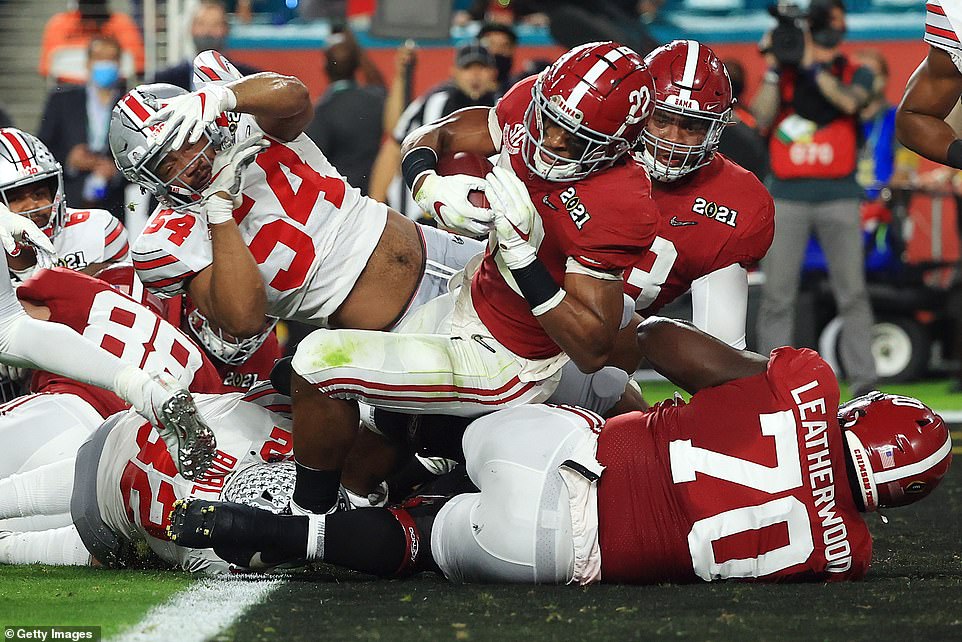 After the underdog Buckeyes' first possession ended in a quick punt, the Crimson Tide responded with a 12-play scoring drive that culminated with Alabama running back Najee Harris converting on fourth down with a one-yard touchdown run 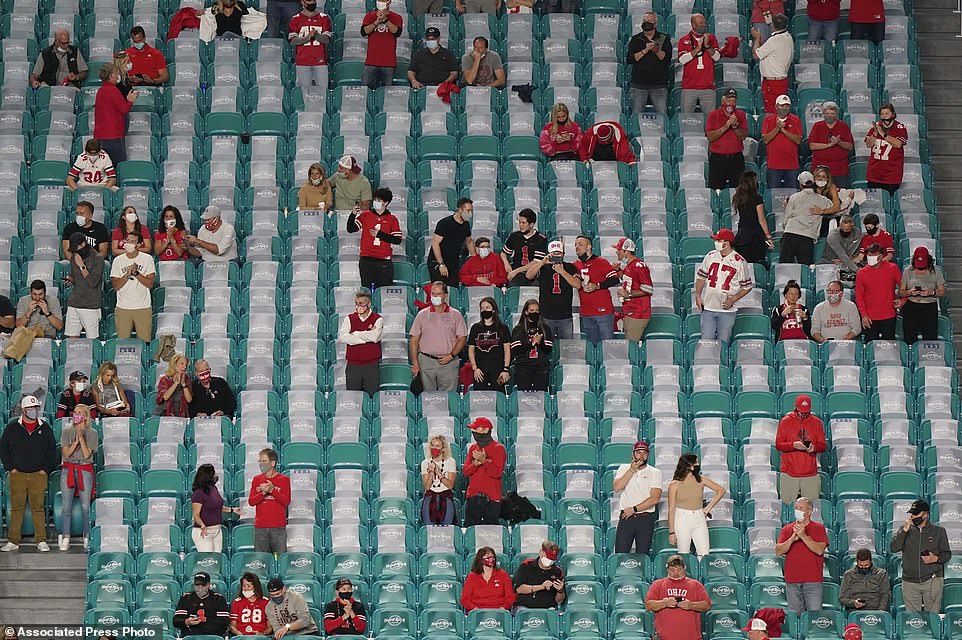 The Heisman Trophy winner had catches for 12 catches for 215 yards and three touchdowns, all in the first half as the Crimson Tide bolted out to a 35-17 lead.

'It came down to the young guys just putting in the work, every day, every week, knowing if somebody went down, they were going to have to come in and do something big,' Smith told ESPN. I believed in them from the jump. That's what we do, that is why you come to Bama.'

Sometimes it was simpler than that. On Smith's third touchdown, he lined up in the slot, the closest to the line of three receivers on the left side. Smith cut quickly to the middle of the field and suddenly was matched up against a linebacker, whom he left in the dust for a 42-yard score with 41 seconds left in the second quarter. 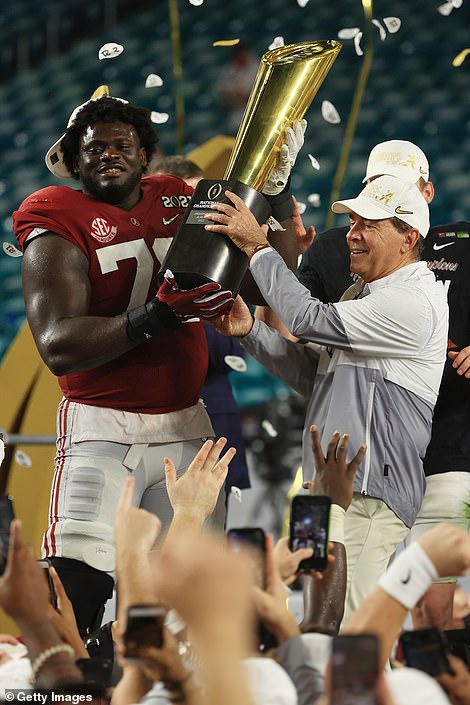 Smith, who finished his freshman season by catching the 2017 national championship winning touchdown pass from Tua Tagovailoa, ended his Alabama career as the leading career receiver in Southeastern Conference history. He was the offensive player of Monday night's game.

'Unbelievable,' Smith said of the season. 'We just finished writing out story, that was the whole thing of us coming back, just finishing the story that we wanted to write and we did that.'

As for Sarkisian, he is on his way to Texas as the head coach. Longhorns fans had to have liked what they saw from their new playcaller. If only he could bring Smith and his fellow Heisman contenders to Austin.

Jones, who finished third in the Heisman voting, was 36 for 45 for a CFP championship-record 464 yards and five touchdowns, operating behind a line that had him rarely feeling rushed. Harris had 158 yards from scrimmage on 29 touches, scoring three times to give him an SEC record 30 touchdowns this season.

Smith hardly played in the second half, leaving with what an injury. He returned to the sideline in the fourth quarter with his left hand wrapped to the wrist, two fingers taped together, and wearing a Heisman mask.

Alabama hardly missed him and cracked 50 early in the fourth quarter when Harris went in untouched from a yard out.

Smith and Harris surprised some by returning to college after last season for their senior years.

Boy, did it turn out to be worthwhile. Along with Jones, another member of that 2017 recruiting class, they will leave Alabama as the leaders of a team that managed to make an arduous march from through the pandemic look easy. 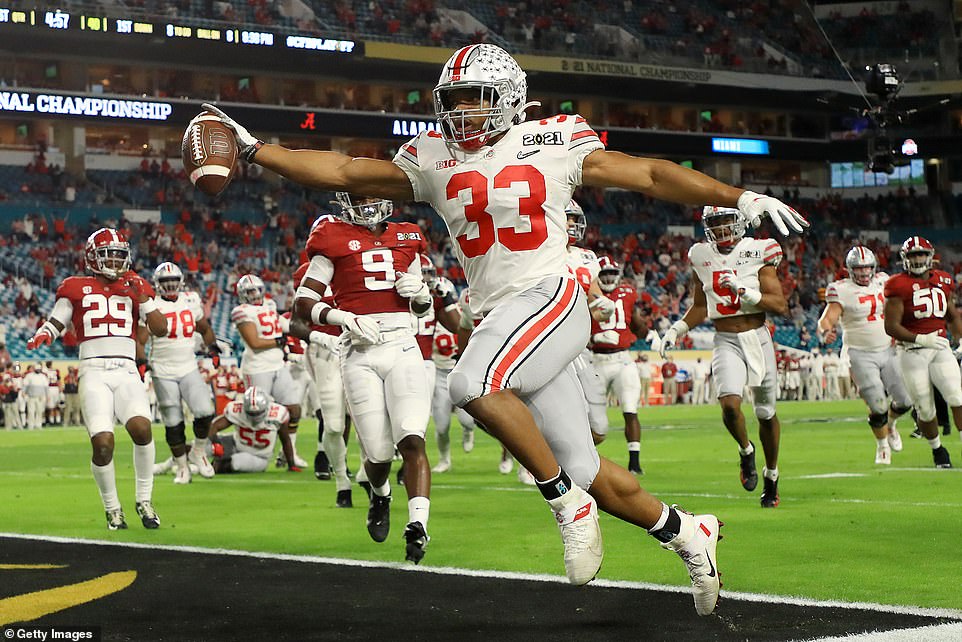 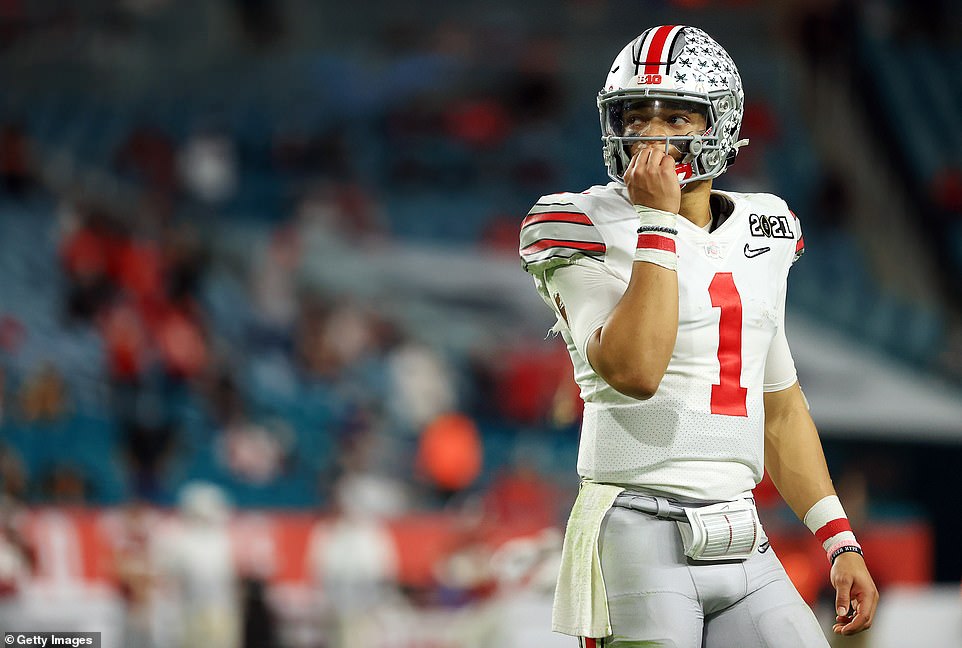 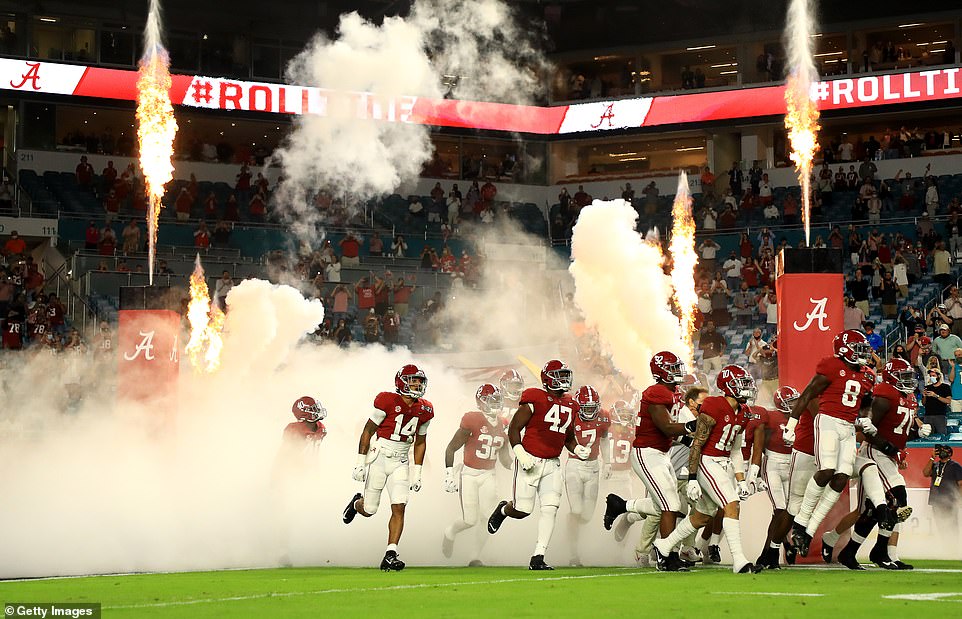 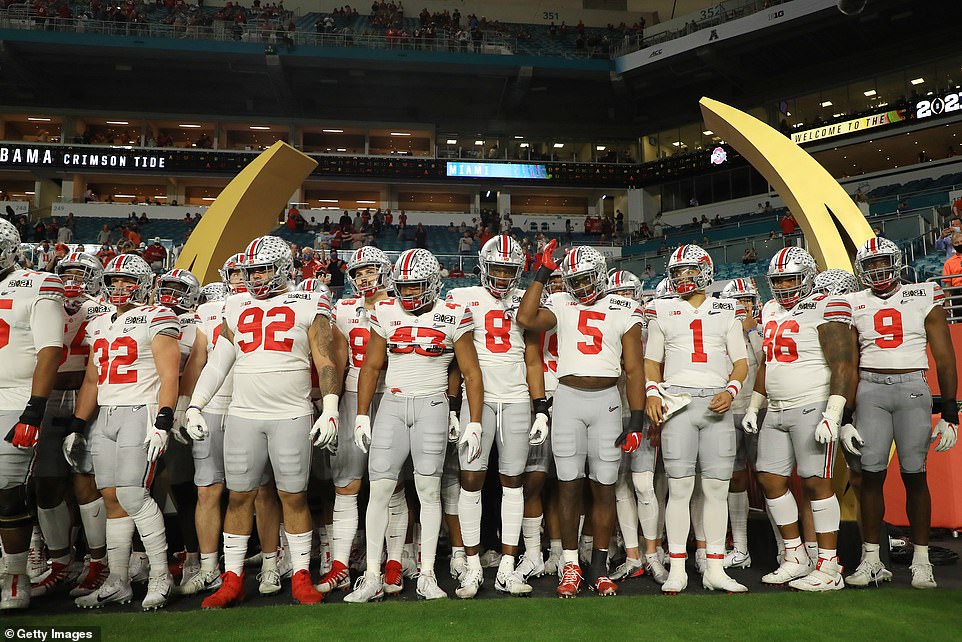 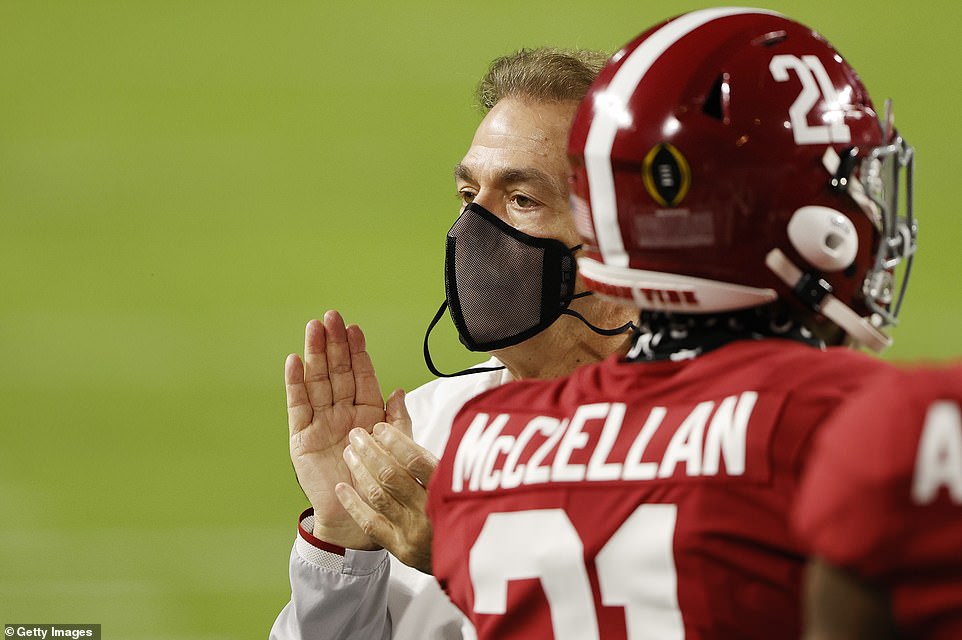 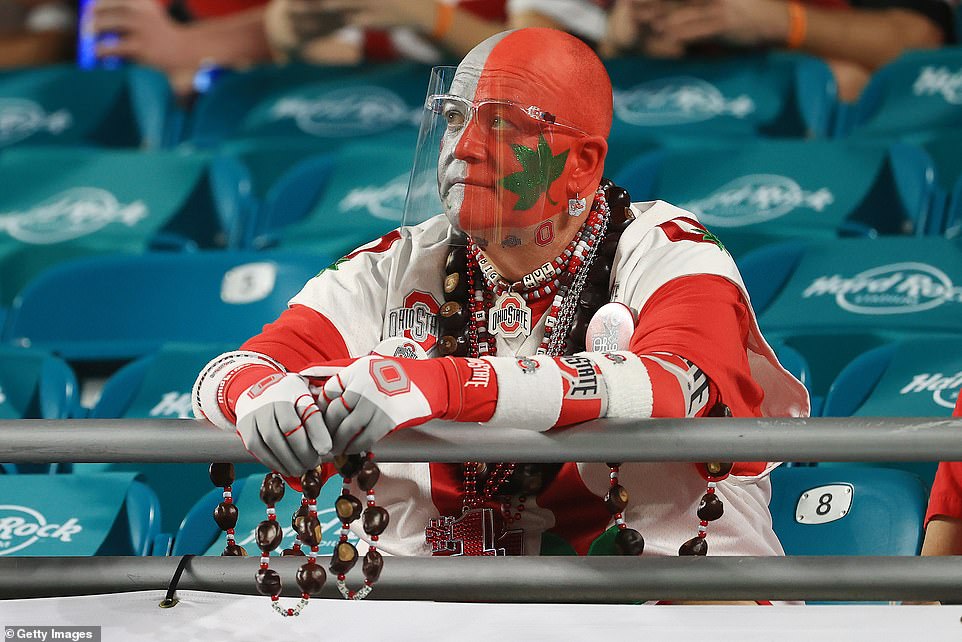 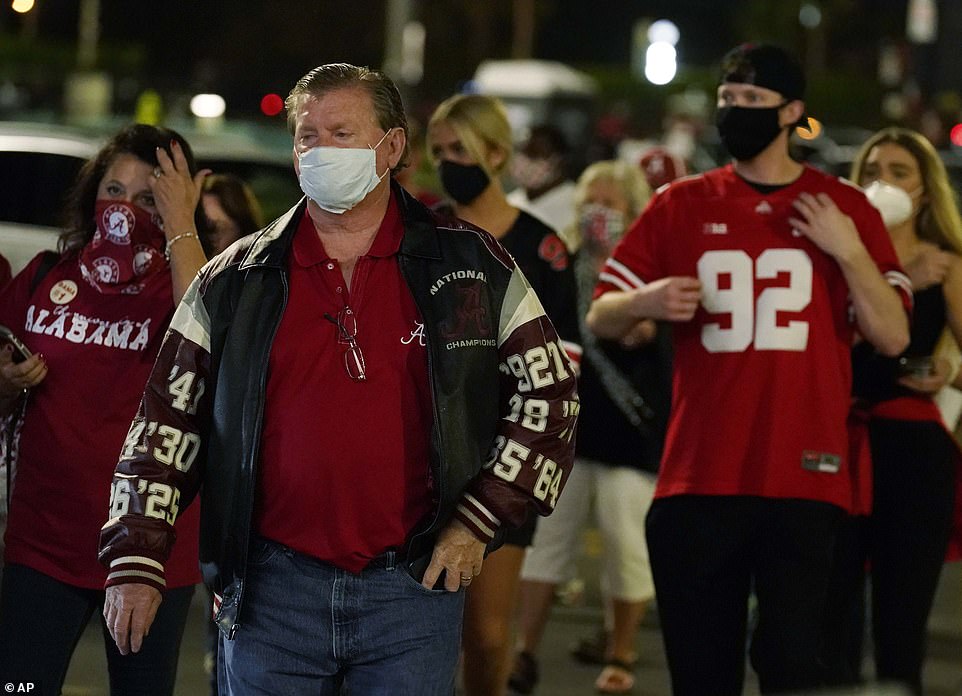 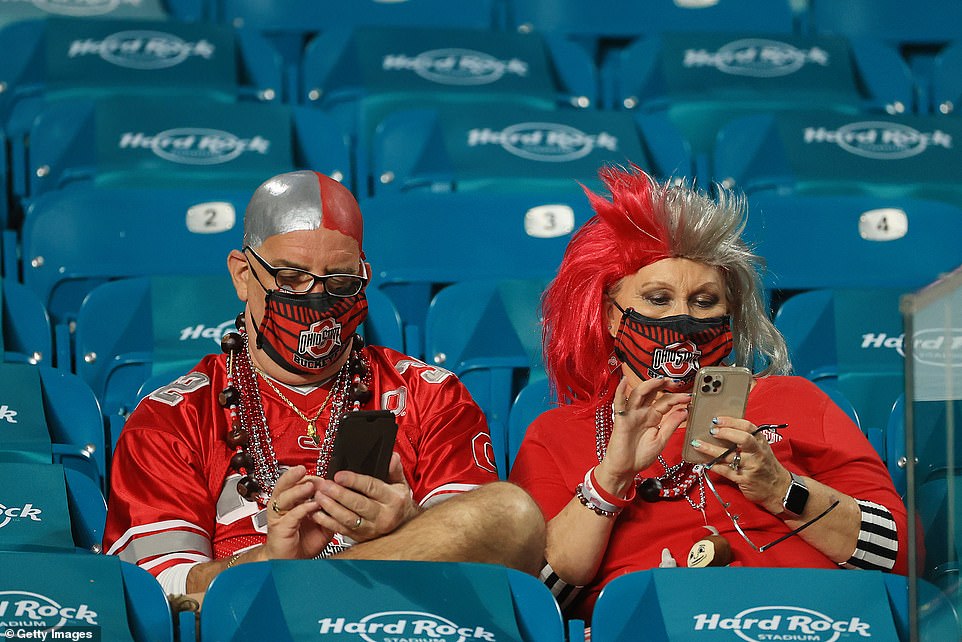 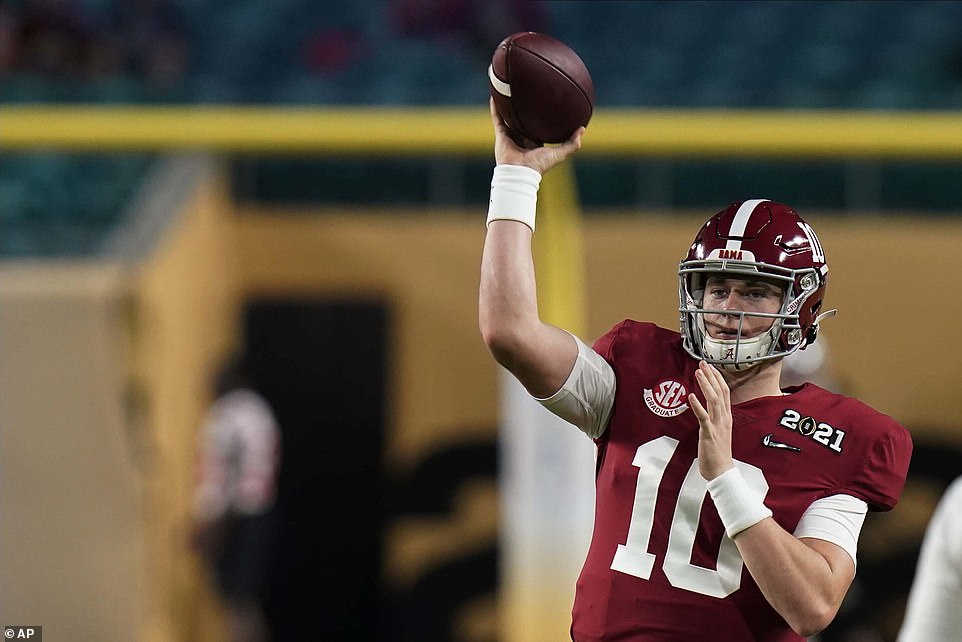 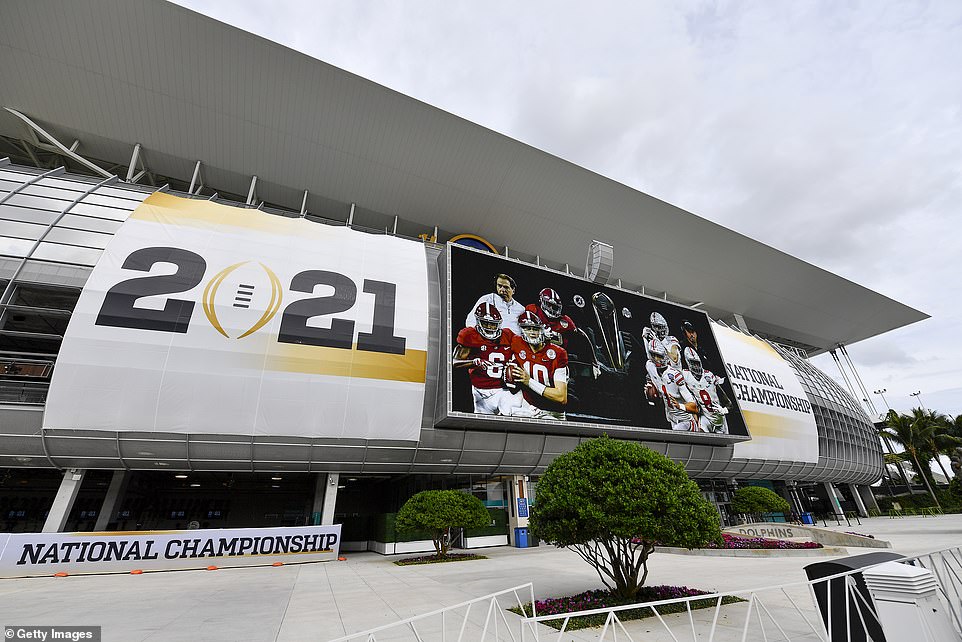 The final game of this taxing and strange season played through the coronavirus pandemic is on schedule to take place at Hard Rock Stadium, home of the NFL's Miami Dolphins, with 16,000 fans in attendance as planned 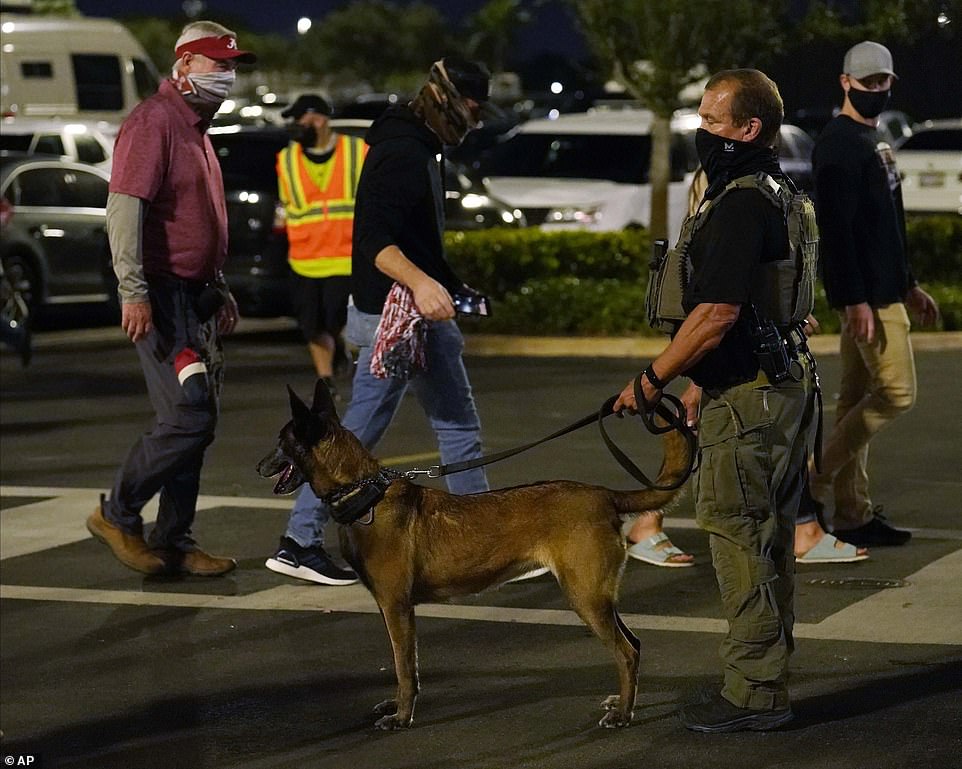