About 20 members of the New York region gathered at the entrance to the Brooklyn VA Medical Center at 7:30 am on Jan. 13, with signs and speeches in hand.

The first member to speak was medical-surgical nurse Carissa Coccimiglio. She spoke of her time working at the location since 2015.

“As the years went on, I have noticed significant changes here and not for the better. The facility is expecting nurses to take on more and more responsibility, to meet certain criteria so our hospital can receive an ′X′ number of stars,” she said in her prepared statement.

Coccimiglio went on to say the number of nurses on staff has dwindled and there’s “moral distress” amongst them “because of the hospital’s failure to provide adequate staffing.”

This, in turn, has led to poor quality care for the veterans and a safety issue for the nurses, she said. 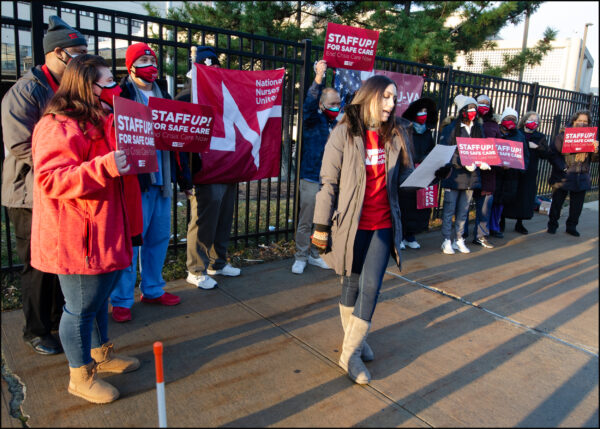 The NNU is demanding the VA hire more nurses, including “contract” or “travel” nurses on a temporary basis, and streamline the hiring process.

“Our process is one of the slowest,” James Young, an infectious control nurse and the director at NNU, told The Epoch Times.

Young believes the VA hospitals are so short-staffed that each campus needs at least 15 to 20 new hires.

He said recruits could be from other agencies, recent graduates, or from out of state. Travel nurses would be provided housing, as they were during the early days of the pandemic.

While the pandemic hasn’t helped the situation, Young said the staffing shortage had been going on “for years,” and put the blame squarely on the VA, saying it “has not lived up to the demands” of the needs of veterans.

Young said the latest spike in cases of the Omicron variant includes nurses, so the already diminished staffs get even smaller when large numbers of them call in sick.

Maria Lobifaro is an Intensive Care Unit nurse and the associate director of NNU. She worked at the Brooklyn VA Medical Center full time for nearly 10 years.

But last month she made the decision to convert from full-time to intermittent.

“The decision was solely made on the way that they’re staffing this hospital,” she told The Epoch Times. “It is unsafe. Not just for veterans, but for nurses.”

She went on to say that nurses are regularly “expected to take assignments outside of their scope of practice,” and that puts their nursing licenses in jeopardy.

Lobifaro said she’s personally met with upper management of the hospital on four separate occasions in 2021, and voiced her concerns regarding the staffing shortage each time.

“It fell on deaf ears,” she said. “The first meeting, they completely brushed it off. We told them, ′Your contract nurses are getting ready to leave; the regular nurses that work here cannot staff this facility.′ Didn’t do anything.” 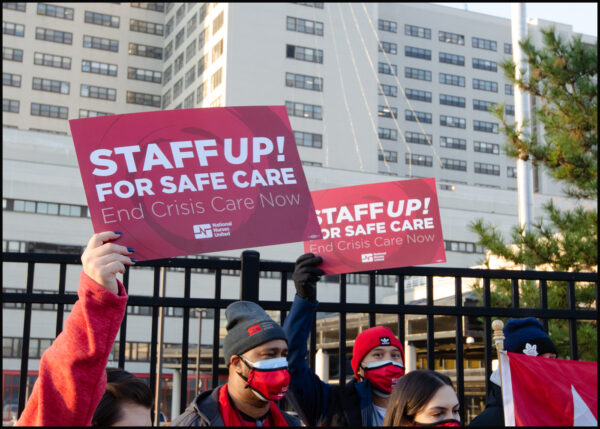 Members of National Nurses United rally in front of the Brooklyn VA Medical Center for the alleviation of staffing shortages at VA hospitals nationwide, on Jan. 13, 2022. (Dave Paone/The Epoch Times)

Gene DiGiacomo was one of the two Vietnam veterans in attendance. He served in the U.S. Navy from 1968-70.

“The system doesn’t care,” the 77-year-old told The Epoch Times.

As a cancer survivor of Agent Orange, DiGiacomo has been in and out of the Brooklyn VA hospital countless times over the decades and has seen firsthand the need for a better allocation of funds.

“This government has a tendency of always putting money other places,” he said. “They seem to think that we did our job and we’re done.”

DiGiacomo has witnessed the staffing shortage personally. “There’s not enough staffing to cover the people who need help.”

Michael A. Drake, the public affairs officer for the VA’s NY Harbor Healthcare System, responded to The Epoch Times’ request for a comment with an email stating, “The VA New York Harbor Healthcare System is meeting this nation-wide staffing shortage head-on by streamlining our recruitment for essential healthcare roles, which includes fast-tracking the onboarding process for nursing staff.

“We are proud of our nurses for continuing to deliver exceptional care to our veterans during this pandemic.”

In the meantime, DiGiacomo offers this solution: “It’s very simple. Staff us up.”

Nurses Take to the Street In Response to Staffing Shortages