The EU’s drug regulator has expressed doubts about whether a second booster dose of the currently available COVID-19 vaccines would be a sustainable long-term approach.

“There is an emergency discussion around the possibility of giving a second booster dose with the same vaccine currently in use. Data has not yet been generated to support this approach,” Marco Cavaleri, the European Medicines Agency’s (EMA) head of vaccines strategy, told a media briefing.

He added later, “We would like to see this data before we can make any recommendation, but at the same time we are rather concerned about a strategy that [involves] repeated vaccinations within a short term.”

An additional vaccine booster shot “could be considered as part of a contingency plan,” but “repeated vaccinations within short intervals will not represent a sustainable long term strategy,” according to Cavaleri.

When asked to expand on his statements, Cavaleri said that for a hypothetical approach of giving vaccine booster shots frequently, such as every four months, “we will end up potentially having problems with immune response and immune response may end up not being as good as we would like it to be, so we should be careful in not overloading the immune system with repeated immunization.”

He also noted that continuous administration of boosters can also lead to fatigue in the population.

“It will be much better to start thinking about an administration of boosters that is more spaced in time,” Cavaleri said.

The EMA is in conversation with vaccine developers in case there’s a need to update the current vaccines, according to Cavaleri. But he said any change “would have to be coordinated globally.” 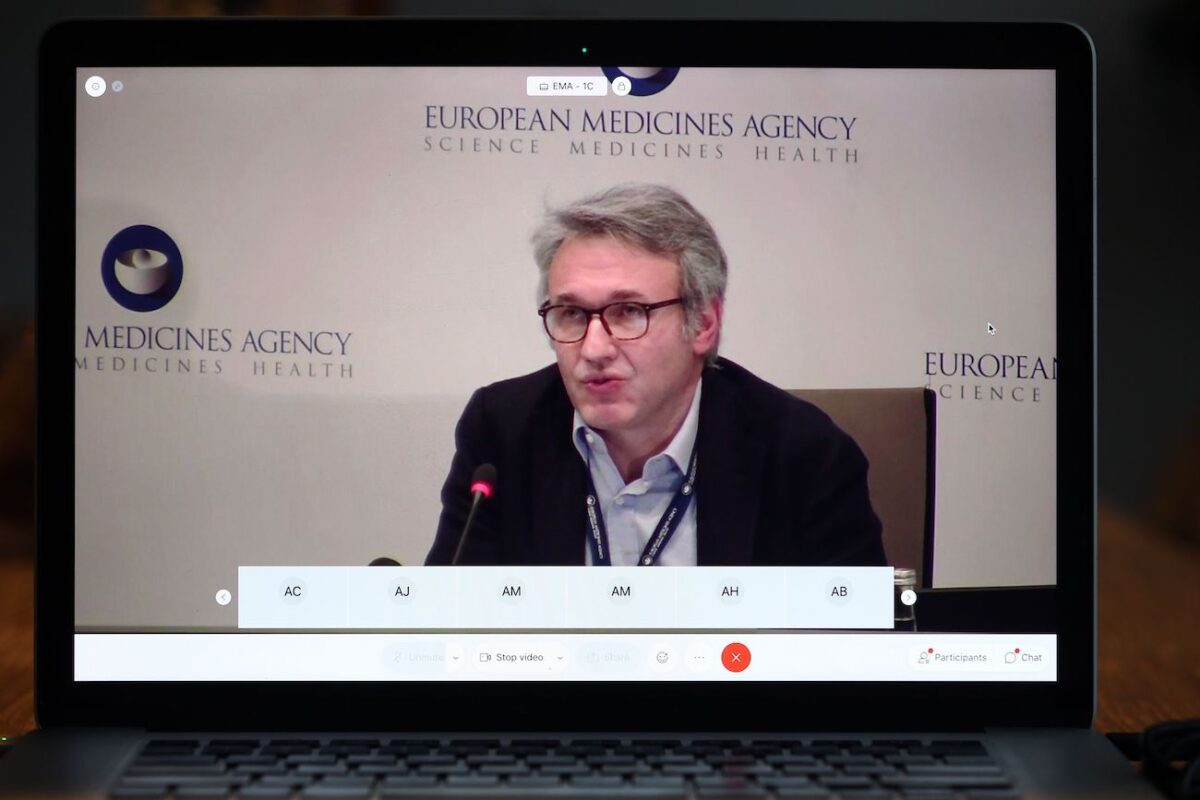 A screengrab from a laptop shows Marco Cavaleri, head of Biological Health Threats and Vaccines Strategy, speaking during an online press conference in Amsterdam on Dec. 21, 2020. (Pieter Stam de Jonge/ANP/AFP via Getty Images)

More data on the effect of the Omicron coronavirus variant on vaccines and a better understanding of the evolution of the current wave are needed to decide whether an Omicron-specific vaccine was needed.

“While a monovalent Omicron vaccine would represent an obvious candidate to be investigated, other options such as a multivalent vaccine cannot be ruled out as potential alternatives,” Cavaleri said.

A Strategy to ‘Anticipate the Next Move’

“It is important that there is a good discussion around the choice of the composition of the vaccine to make sure that we have a strategy that is not just reactive after the virus changes, but try to anticipate what could be the next move and try to come up with an approach that will be suitable in order to prevent a future variant that, in any case, will emerge,” Cavaleri said.

The EMA has called for a meeting with global regulators on Jan. 12, which will include officials from the U.S. Food and Drug Administration.

“Tomorrow we will be looking at all the evidence that we have so far with the current vaccine, so the extent by which they are still providing vaccine effectiveness and whether indeed we should still think that giving a booster shot at this point in time is the best strategy,” Cavaleri said.

He noted that the World Health Organization “will play a critical role” in decision-making.

Cavaleri noted that the CCP (Chinese Communist Party) virus, which causes COVID-19, “is still behaving as a pandemic virus, and the Omicron emergency is currently showing that.”

“So we should not forget we are still in a pandemic,” he said. “Nevertheless, with increase of immunity in the population and with Omicron there will be a lot of natural immunity taking place on top of vaccination, we will be vastly moving toward a scenario that will be closer to endemicity.”

Separately, he noted, “Ideally, if you want to move toward a scenario of endemicity, then such boosters should be synchronized with the arrival of the cold seasons in each of the hemispheres, similarly to what we’re doing with influenza vaccines.”

On Jan. 10, Pfizer Chief Executive Albert Bourla said a COVID-19 vaccine that specifically targets the Omicron variant of the virus, as well as already circulating variants, “will be ready in March,” noting that the company is “already starting manufacturing some of these quantities at risk.”

Bourla said Pfizer is ready to file for U.S. regulatory approval for the redesigned COVID-19 vaccine, and that the company has built up ample manufacturing capacity, such that it won’t be a problem to switch immediately. He also noted that COVID-19 vaccines eventually could be an annual shot for most people, and some high-risk groups might be eligible to receive the shots more often than that.

On Jan. 11, Cavaleri said April or May would be the soonest the EMA could approve any variant-targeted vaccine.

“In terms of the switch of the manufacturing, this is a decision that is beyond EMA, and it will be very important there is a global discussion around the best option here in the interest of public health,” he said.