Locked-down Britons are today questioning if the Covid crackdown has gone too far after a jogger was stopped by a marshal for 'breathing heavily'.

Bizarre footage shows a perplexed jogger being collared by a 'Covid marshal' while on a riverside run in west London.

Asked why he is being stopped, the jogger is told by the high-vis wearing security guard: 'Because you are breathing heavily'.

Baffled Gary Purnell, who filmed the incident, described it as 'the craziest thing in the world'.

It came as a top police officer revealed forces are in discussions with ministers that could see the rules on exercise and travel tightened to make sure they are uniformly applied across the country.

Assistant Chief Constable Owen Weatherill, from the The National Police Chief's Council, said: 'There was a deliberate effort to try to make it flexible initially so there was a degree of freedom of choice for people .... but that clearly is presenting other problems.'

Jogger told to stop by covid marshall because of 'heavy breathing' 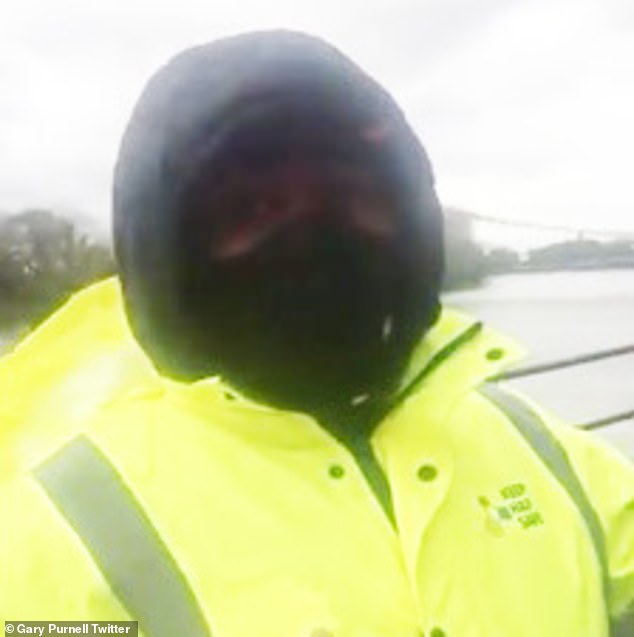 The eye-brow raising footage shows the perplexed jogger being collared by a high-vis wearing security guard while on a riverside run in Hammersmith, west London 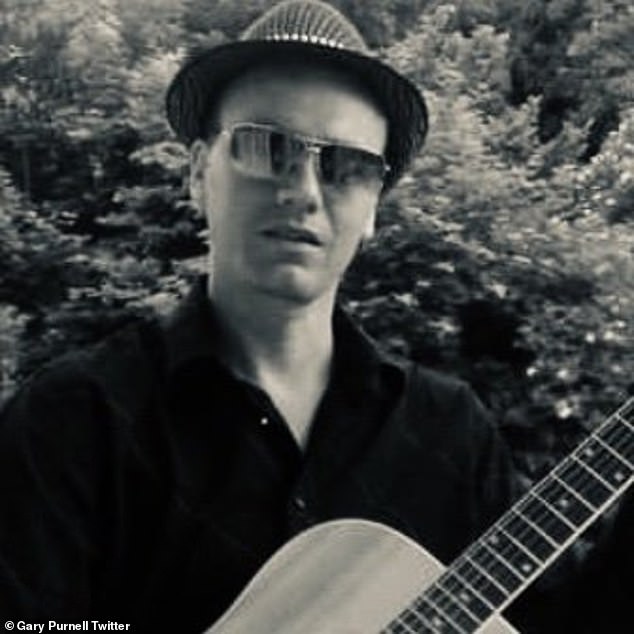 Asked why he is being stopped, the jogger, Gary Purnell (pictured), is told 'because you are breathing heavily'. 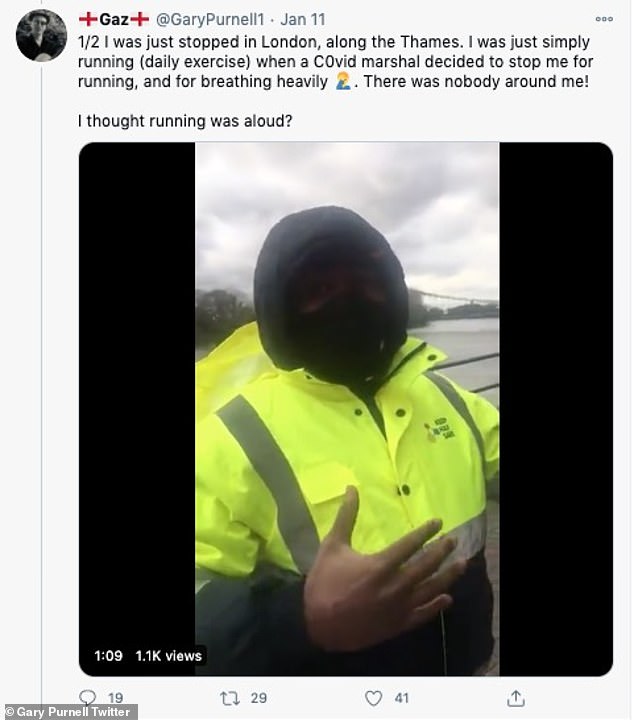 At the end of the video, which was posted on Twitter (pictured) a stunned Mr Purnell describes the situation as 'the craziest thing in the world'

He told the Home Affairs Committee that the travel restrictions were 'a real challenge when it comes to exercise'.

That challenges some forces more than others. If you happen to operate in an area which has got natural beauty spots, that will attract people in,' he said.

'But the regulations are constructed in such a way as to not be constrictive on the type of exercise an individual might want to take, so there is a balance here between trying to allow people to exercise some free will in the type of exercise they do, and why there is no physical restriction on how far you can travel to do it.'

'Travel itself is not outlawed, not illegal. It is the activity itself and the circumstances of it, and that is where it gets into that realm of subjectivity. That is the big that challenges officers across the country and that presents differently in different areas of the country

'What might be a problem in one area is not in another and that is where the challenge is for us at the moment. And that is something we are actively engaged in a conversation in at the moment, as to how we can develop that further.'

It comes as eye-brow raising footage of a jogger being collared as he ran along the River Thames was posted on social media.

Jogger Mr Purnell was running on a riverside pathway in Hammersmith, west London at the time.

When asked why he was stopped, he is told: 'Because you are breathing heavily'.

Baffled Mr Purnell then asks when the new rule was introduced, sparking the security guard to claim the policy was brought in 'yesterday'.

But in the video, Mr Purnell continues to protest his right to one form of exercise-a-day, as outlined under the Government's lockdown rules.

The marshal's supervisor then joins in to back-up colleague, by saying joggers were causing difficulties for those walking along the Thames.

At the start of the video, after being stopped, Mr Purnell says: 'Why can't I run along here? Explain why we can't run?'

The marshal then says: 'Because you are breathing heavily.'

Baffled Gary adds: 'I'm breathing heavily? You don't have to wear a mask outside. In the Government rules it doesn't say I cant run.'

He responds: 'I can't stop you, I can only tell you that you can't.'

In a second clip, which he posted on Twitter, Gary confronts the marshal's supervisor, asking: 'This gentleman here said I have to stop running along here. Can you please explain the reason why?'

The supervisor replies: 'We are briefed to stop people. This area gets busy.'

The boss says: 'We are not stopping people doing exercise.'

As the conversation continues, the supervisor says: 'Hear me out, what i'm saying. In some cases, some people run past people who are walking.'

Gary responds: 'I was nowhere near anyone. I was running on my own in the middle of the path and he said I must stop running.'

Pointing at the marshal he said: 'That's what you said. Because of heavy breathing.'