More than a dozen cities and counties have defied Gov. Brian Kemp to adopt a mask mandate to contain the spread of the coronavirus, but an Atlanta Journal-Constitution review shows that the requirements are rarely, if ever, enforced.

The legal requirement to wear face coverings is a key part of Kemp’s lawsuit against Atlanta Mayor Keisha Lance Bottoms that contends the mask mandate and other coronavirus restrictions are unenforceable and too restrictive, and the case could determine whether other cities are allowed to keep the requirements on their books.

But the AJC analysis shows that the requirements to wear a mask, which top public health experts agree is a leading way to stem the disease outbreak, is largely symbolic. The AJC contacted 15 police departments and law enforcement agencies in the cities, suburbs and small towns that enacted the restrictions. Not a single citation was reported.

That’s in part by design. When Savannah became the first city in Georgia in June to enact a mask mandate — and threaten a $500 fine to violators — Mayor Van Johnson framed it as a way to urge residents and visitors to trust public health experts. Savannah police were required to offer violators face coverings and deliver warnings before they could write a ticket.

“We will never be accused of not doing everything that we can to fight for our city,” Johnson said earlier this month. “Savannah will do what we can to take care of its citizens.”

Athens Mayor Kelly Girtz, whose city adopted a mask mandate on July 7, said the rules were always meant to be more of a deterrent than a criminal penalty. He compared it to anti-littering statutes on the books.

“We don’t want to give a bunch of tickets to people because there’s overflowing trash. We just want people to be good neighbors,” said Girtz. “And the mask ordinance sets out to do that. We’ve learned a lot about how important masks are — that masks equal safety.”

A new executive order that Kemp signed on July 15 adds another wrinkle. It explicitly outlaws mask ordinances, prompting some police departments that might have otherwise enforced local restrictions to back off citing potential violators.

“We are pretty much in a holding pattern,” Union City Police Officer Jerome Turner said. “But we are expecting our residents and visitors to follow the city ordinance and the CDC guidelines for wearing masks.”

Union City, in south Fulton County, is among a number of municipalities that reported no mask citations. Others include Atlanta, Athens, Augusta-Richmond County, Rome and Savannah.

Likewise for the metro Atlanta suburbs of Avondale Estates, Brookhaven, Decatur, Doraville, Dunwoody and Fairburn. The police departments in East Point, College Park and the city of South Fulton didn’t respond to a request for details.

More governments are fast joining the list. Macon-Bibb County recently approved a resolution requiring face coverings, as did the city of Clarkston. So did DeKalb County, though it included an exception for “conscientious objectors.”

Local officials are monitoring the legal feud between Bottoms and Kemp, which is headed for mediation. The mayor called Kemp last week to initiate talk of a settlement over the lawsuit, which contends cities can’t adopt more restrictive measures than the state.

Kemp filed the lawsuit shortly after Atlanta adopted its mask mandate as well as “phase one” economic restrictions that urge restaurants to halt dine-in services and encourage residents to stay home if possible.

The legal complaint contends that Atlanta’s regulations have sparked confusion because they conflict with Kemp’s statewide order, which has lifted a shelter-in-place advisory for most Georgia residents and allows businesses to reopen if they follow guidelines.

“This is about the lives and livelihoods of Georgians,” said Kemp, who has encouraged the use of masks but said he doesn’t believe a mandate would be effective. 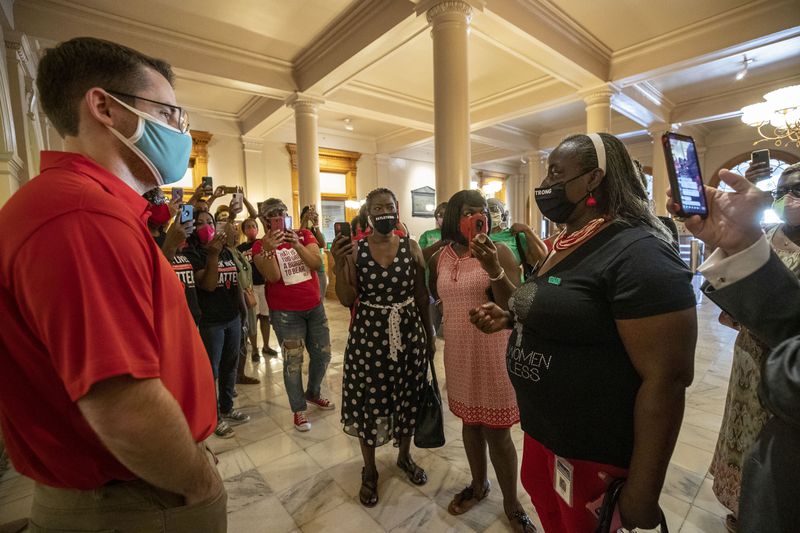 “We cannot be afraid of this virus. To be smart and be scared of it, that’s a good thing. You should wear your mask. But we also have to learn to continue to operate.”

While the mayor has said Kemp “overstepped his bounds,” she has tried to tone down the angry back-and-forth between the two camps over the last few days. Both sides are set to negotiate before a 10 a.m. hearing on Tuesday.

Until an agreement is reached — or a judge rules — confusion among law enforcement agencies is likely to continue.

In Northwest Georgia, Rome’s assistant police chief, Debbie Burnett, lamented that civil infractions, such as not wearing a mask, are already difficult to enforce.

“I just wish everyone would wear a mask so we can get past this thing,” she said.