7/28/2021 Update: We're back down to empty:  need your help to cover server expenses!  Nobody here is making any money in bringing aggregated daily news and resources to you.

If you want T-Shirts, hats, cards, mugs and other NOMASKERS merchandise for the store, that investment has to come from somewhere.  Let's do this NOW!

Satanic Panic: The headmaster at a Michigan Christian school rejects science, claims a mask mandate means “Satan wins,” and has fired a teacher for raising concerns about a lack of masks in classrooms.

Many Michigan schools are open for in-person learning.

But even those schools look very different from normal. There are a host of state requirements schools must comply with to help prevent the spread of COVID-19.

But one private Christian school is defying some of those safety mandates. And a former teacher said he was fired after he pushed back.

A teacher in Michigan says he was fired by a private elementary school that refused to comply with the state’s mask mandate for incoming students in the fall.

A music teacher at a Christian private school in Michigan claims that he was fired after he raised concerns about its decision to reopen while defying some of the state’s COVID-19 safety mandates.

In an interview with Michigan Radio, part-time teacher Nathan Smith claims that he was dismissed from his job at Oakdale Academy after he brought up problems with its reopening strategy to headmaster David Stanton.

According to reports, the teacher, Nathan Smith, was fired after he went to the school administration with concerns about the school defying the state’s COVID-19 safety regulations.

In an interview with Michigan Public Radio (MPR), Smith said he was fired after warning Oakdale Academy Headmaster David Stanton that the school would be placing students and staff at risk by refusing to honor the state safety regulations for school reopening.

In a video that is no longer available to the public, Headmaster Stanton said:

I don’t want divisiveness here. I do not want to allow our enemy Satan to gain a foothold, not even a toehold, in this school.

Smith said that after he brought up his concerns about the mask rules, Headmaster Stanton said he’d rather not open the school than mandate masks:

He made it very clear that he would rather close the school’s doors than open with too many restrictions.

Smith said that the headmaster was placing politics ahead of the students’ health and safety:

I’m just appalled that instead of instead of being able to brag about how good of a job we’re doing, we’re just trying to pretend like everything’s normal. It seemed like they wanted to take a political stance against that, and that the students were going to pay the price.

Bottom line: The headmaster at a Michigan Christian school rejects science, claims a mask mandate means “Satan wins,” and has fired a teacher for raising concerns about a lack of masks in classrooms. 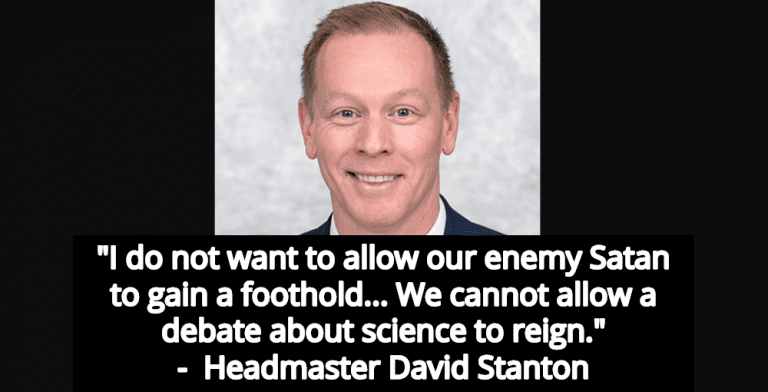