More than 32,000 medical doctors and health scientists from around the world have signed a petition against lockdowns put in place to curb the spread of COVID-19, saying the measures are causing “irreparable damage.”

As of Oct. 13, over 23,000 of the signatories were medical practitioners and 9,000 were medical and public health scientists. They have joined more than 400,000 members of the general public in signing the petition.

“Coming from both the left and right, and around the world, we have devoted our careers to protecting people. Current lockdown policies are producing devastating effects on short- and long-term public health,” reads the petition, titled the Great Barrington Declaration, after the Massachusetts town where it was authored by the three experts on Oct. 4.

The declaration says lockdowns result in worsening cardiovascular disease outcomes, fewer cancer screenings, lower childhood vaccination rates, and deteriorating mental health, to name a few issues, all of which will lead to high mortality rates in the years to come.

“Keeping students out of school is a grave injustice,” the doctors write.

Instead of shutting everything down until a vaccine is available, the doctors say focus should be on minimizing mortality and social harm until herd immunity is reached. Herd immunity refers to when a population becomes immune to an infectious disease, which the doctors say will eventually be reached for all populations, and can be assisted by, but not dependent upon, a vaccine.

“Fortunately, our understanding of the virus is growing. We know that vulnerability to death from COVID-19 is more than a thousand-fold higher in the old and infirm than the young. Indeed, for children, COVID-19 is less dangerous than many other harms, including influenza,” the declaration states.

The declaration says public health officials should aim to protect the most vulnerable population, while allowing those who are not vulnerable to “resume life as normal.”

“The most compassionate approach that balances the risks and benefits of reaching herd immunity, is to allow those who are at minimal risk of death to live their lives normally to build up immunity to the virus through natural infection, while better protecting those who are at highest risk.”

Measures to protect the vulnerable population, the declaration says, can include examples such as minimizing staff rotations at nursing homes, delivering groceries and other essentials to retired people living at home, and the elderly meeting family members outside rather than inside when possible. Meanwhile, all members of society should take simple hygiene measures such as hand-washing and staying home when sick to bring down the herd immunity threshold, the doctors say.

But young, low-risk adults should be allowed to work normally, rather than from home; schools should be opened for in-person teaching; and extracurricular activities such as sports should be resumed, the declaration says.

“Arts, music, sport, and other cultural activities should resume. People who are more at risk may participate if they wish, while society as a whole enjoys the protection conferred upon the vulnerable by those who have built up herd immunity,” the declaration says. 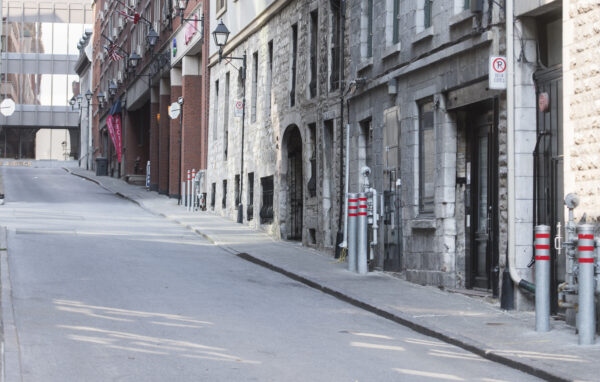 An empty street in Old Montreal on Oct. 10, 2020. (The Canadian Press/Graham Hughes)

Dr. Matt Strauss, one of the Canadian doctors who has put his name to the declaration, told the Toronto Sun that most medical professionals he has talked to agree that the lockdowns are bringing more harm than benefit.

“I don’t even think my opinion is a minority opinion among the experts I work with,” said Strauss, a critical care physician and professor at Queen’s University School of Medicine.

However, the declaration also has its critics.

“We cannot reach herd immunity without a massive loss of life or a vaccine. It’s that simple. Honestly, it boggles my mind that intelligent people are signing on to this statement,” Dr. Irfan Dhalla, a general internist and a vice-president at Unity Health which operates two hospitals in Toronto, told the National Post.

Dr. David Naylor, co-chair of Canada’s COVID-19 immunity task force, told the Post that given the prospects of the eventual arrival of a COVID-19 vaccine, “why on earth should we rush to embrace a reckless prescription for a demographically-selective national ‘chickenpox party’ involving a dangerous pathogen?”

Letter to Ford Against Lockdowns

In late September, a group of 20 doctors in Canada issued a letter to Ontario Premier Doug Ford, arguing against a return to lockdowns amid a rise in COVID-19 cases.

“Lockdowns have been shown not to eliminate the virus,” said the letter, published by the National Post.

The doctors, which include professors of medicine from the University of Toronto, McMaster University, and the University of Ottawa, and different hospitals, say lockdowns slow the spread of the virus only as long as the lockdown is in place.

“This creates a situation where there is no way to end the lockdown, and society cannot move forward in vitally important ways including in the health sector, the economy and other critically important instrumental goods including education, recreation, and healthy human social interactions,” the letter says.

The doctors say the recent increases in cases in the province this time around are in people under 60, who are unlikely to become very ill as a result of being infected with COVID-19. While those over 60 accounted for over half of the cases during the peak of the pandemic in Ontario in mid-April, now they only account for less than 15 percent of the cases.

“In Ontario and other parts of the world, such as the European Union, increasing case loads are not necessarily translating into unmanageable levels of hospitalizations and ICU admissions,” the letter says.

“While we understand the concerns that these cases could spill into vulnerable communities, we also need to balance the actual risk.”

The doctors say officials should take the costs of lockdowns into consideration. This includes the negative health effects, such as the 40 percent rise in overdoses in some jurisdictions, delayed surgeries, delays in cancer patient diagnostics, and closure of schools.

“Our society has borne enormous pain over the past six months. It’s time to do something different,” the doctors write.

Meanwhile, a study published in the British Medical Journal last week says while initial restrictions were effective at reducing the burden in intensive care units in U.K. hospitals, maintaining the lockdowns would prolong the pandemic and increase the number of deaths.

“The model predicted that school closures and isolation of younger people would increase the total number of deaths, albeit postponed to a second and subsequent waves,” says the study, based on the data used by the British government when it imposed lockdowns in March.