s the alleged “second wave” of the Coronavirus “pandemic” is reported to be sweeping across Europe in recent weeks, many governments have enthusiastically embraced their totalitarian side and granted themselves sweeping new “emergency powers” alongside new lockdown measures.

The public has been markedly less co-operative this time around. Rebelling against the seemingly arbitrary limitations which are not supported by either science or common sense. Protests have taken place all across the continent.

Thousands of people gathered in Berlin over the last few days, protesting the Merkel government passing a new lockdown law. Police turned water cannons on the crowds, and nearly 200 people were arrested.

According to reliable sources, elements of Antifa rushed to the scene of the Anti-New Normal Totalitarianism protest in Berlin today, hoping to hold the "Corona Deniers" down, so that the cops could hose them real good, but they were just a little too late. pic.twitter.com/RdQ67qYjnN

The mainstream reported “hundreds” of protesters, but as pictures plainly show it was more like tens of thousands:

“Thanks for the picture Majd Abboud, not hundreds, not thousand, but ten’s of thousands protested in Berlin today and it’s only the beginning of something big…” Sonja Van Ende#Covid_19 pic.twitter.com/hLxNaTEqYv

After the Prime Minister of Spain Pedro Sanchez declared a sixth-month state of emergency in late October, there were days of protests across the country.

Barcelona, already a hot-bed of anti-government feeling due to the brutal repression of the Catalan Independence referendum, saw violent confrontations between riot police and protestors 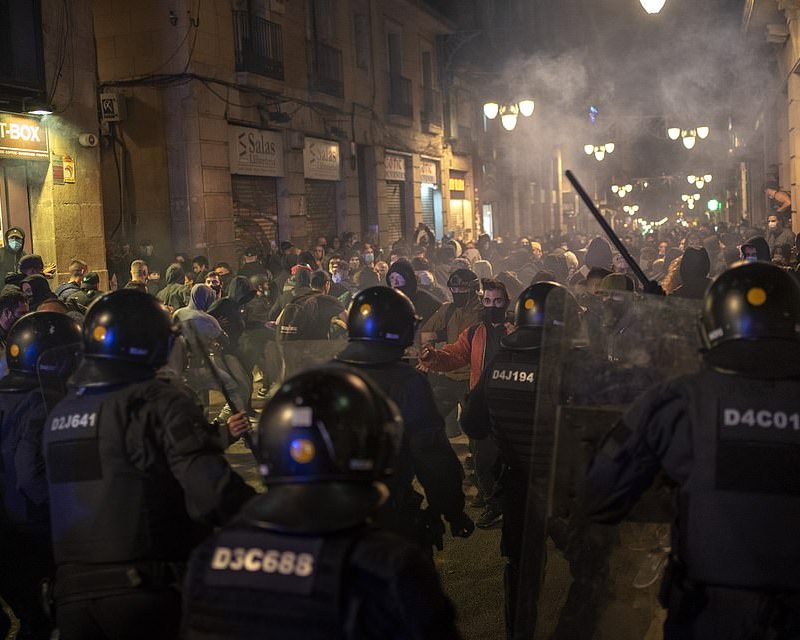 Emmanuel Macron’s brand new “comprehensive security law”, known by protesters as the “gag law”, would further militarise French police whilst making it a crime to capture or distribute the image of police officer. It has met fervent resistance in the shape of angry marches through cities across the country.

Protesters across France took to the streets after a law called the Global Security Bill was passed, which outlawed taking photos of police that could be used to expose an officer’s identity.https://t.co/KQjtfWpXhU#StopLoiSecuriteGlobale #StopTheGlobalSecurity pic.twitter.com/WYpy0BCbLU

Macron’s government has a history of attacking civil liberties, and in response to his “reforms” the country has seen large-scale protests by the Gilets Jaunes for over a year.

The anti-lockdown protests in Italy reached a fever pitch in late October, and were probably the most extensive on the continent. Marches occurred in dozens of cities across the country, including Rome, Naples, Genoa and Bologna.

BOLOGNA, ITALY: The conscience of a country’s population standing against their politicians speaks through this woman who says her life has been destroyed by lockdowns & has nothing to eat or to feed her 3 year old child:pic.twitter.com/84MEBgglkV

The mainstream media went out fo their way to undercut and smear the protests. CNN and Reuters reported only “hundreds” of protesters. Does this photo have “hundreds” of people in it? 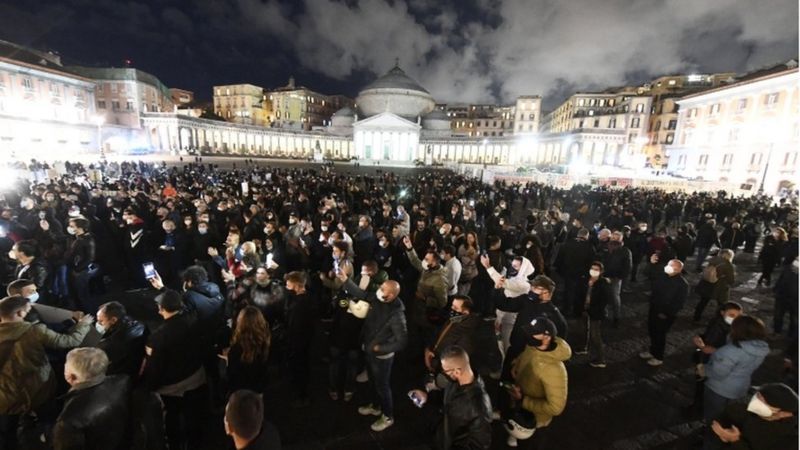 Politico went so far as to actually blame the protests on the Mafia.

Bratislava was home to a huge march of protesters on November 17th, marking the national holiday known as Fight for Freedom Day. These marches were illegal under the Slovakian emergency law, notionally designed to prevent the spread of coronavirus.

BRATISLAVA, SLOVAKIA: Anti-Covid restrictions & anti-government protests despite a ban on public gatherings, on the anniversary of the Velvet Revolution of 1989 & the student demonstration against Nazi occupation of 1939: https://t.co/UzfBlhDoKcpic.twitter.com/oWqhlSTfex

The Danish parliament was subject to 9 days of protests right outside its doors, in opposition to the proposed “vaccination law”, which would allow the police to “physically coerce vaccination through detainment”.

DENMARK: 9 days of protests over a new law that “would be able to define groups of people who must be vaccinated. People who refuse the above can be coerced through physical detainment, with police allowed to assist.”pic.twitter.com/LN0SBVKUE8

After nine days of protests, it was reported on social media that the Danish gov’t had dropped the law. However, I could find no official confirmation of that, or reports in the media.

In fact, the media have barely covered the proposed law, and literally not mentioned the protests in Copenhagen at all. A search for “Covid protests Denmark” on google, turns up almost no results relating to that topic.

The reason to cover the Danish protest less than the others is that they apparently worked. and the last thing the establishment wants people to see is that civil disobedience can change anything.

It’s good to see the general public’s fraying sense of patience with a Covid narrative that has never made any sense, and a “pandemic response” which is likely to do far more damage than it ever could prevent.

Though civil unrest is undeniably a good and powerful thing, this is also a time to be wary. If the establishment feel they are losing control of the situation or the narrative, they are likely to double down or try something desperate.

If you’re aware of other countries experiencing civil unrest due to “anti-covid” measures, please let us know and we will add them to the list.

Anti-Lockdown Protests All Across Europe