When street people in 1978 Dodge B200 Vans with blacked-out windows cynically use sweets to tempt children to take the ride, they go to prison. When the Canadian government does it, apparently, it’s just solid public health administration – for COVID safety.

All of this effort to inject children, despite a 0.00008% hospitalization rate among children, according to CDC figures. 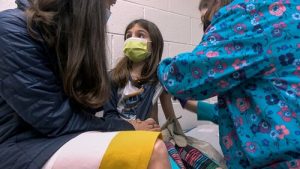 Respect the science, bigot. And get in the van.

The Canadian government recently opened up experimental mRNA gene therapies foisted on an under-informed public as “vaccines” to children 12 and up; as such, the public health apparatus has shifted its propaganda to target a younger audience.

Which means, basically, lots of TikTok propaganda using paid shills and ice cream. Toronto City Hall – the epicenter of Canadian vaccine propaganda – opened up a “pop-up clinic” in late May.

“Toronto Mayor John Tory told reporters early Sunday that it was symbolic and it made sense to have a vaccination clinic at city hall… He said residents already go to city hall to hold celebrations, vigils and protests, and now, they could go there on Sunday to get vaccinated… Tory noted there was music both inside and outside as well as ice cream to make the city hall vaccination experience more appealing.”

The ice cream-for-gene therapy trick, although it might appear trivial and silly, dovetails with graver news out of several Canadian provinces – including Manitoba and British Columbia – in which public health officials insist that no parental consent is necessary to inject children with experimental drugs:

“We have what is called Mature Minor Consent here in B.C., and that is part of the Infants Act, and there is no limit to the age that somebody can consent for medical treatment, including immunization.

We will make sure that resources are available in all of the clinics to assess — if a young person comes in by themselves — to make sure that they understand the implications and can consent for receiving vaccinations.”

Get it? There’s no longer any limit on which experimental medical treatments the authorities can push on your children.

At which point, we arrive at the next item in the horror show: teenage vaccine rebels.

Lest you comfort yourself with the idea that what happens in Canada stays in Canada, the US corporate media, not to be outdone, has also force-fed the concept of circumventing parental consent under the auspices of “human rights.”

The District of Columbia recently enacted legislation to allow children as young as 11 to receive the “vaccine” with no parental approval:

“Even though you’re a teenager, you are your own person, and you’re entitled to be concerned about your health and to protect your health… A young person shouldn’t be trapped by ideas that might cause them grave harm, with which they don’t agree, and it’s not just about them and their health—they could transmit it to other people.”

Thus, nightmarish authoritarianism is cloaked in empathy – everything for the children.

“Teens faced with [hesitant parents] have to weigh things like ‘I know vaccines are lifesaving, but I don’t want to become homeless’… So I tell them if you can’t have that loving conversation with your parents and you’re of age, weigh those consequences seriously… if you’re able to have that conversation, please get your shots as soon as possible.”

In this fantasy narrative:

“[Founder] Kelly’s long-term goal is to use VaxTeen as a platform to advocate for straightforward legislation allowing teenagers to consent to all vaccinations.” 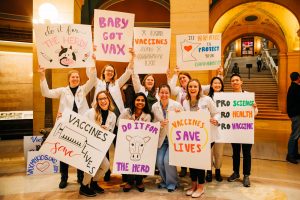 On the VaxTeen site, children can access consent laws by state, “vaccine guides” exploring all the shots available to them, how to locate and access so-called Title X clinics (previously funded by Planned Parenthood) designed to circumvent parental consent, and, of course, tutorials on how to argue with their ignorant MAGA parents about the long-term safety of COVID-19 “vaccines” using phantom data that doesn’t exist:

“After their first fight about the vaccine, the mother-daughter duo didn’t talk for three days. Yesenia was devastated that her mother was putting her health at risk on the basis of debunked vaccine conspiracy theories. Yesenia’s plan is to keep her own vaccination a secret from her mother, who she lives with.”

Can children read a pamphlet and decide they’re now informed enough to drink alcohol? The obvious reason for parental consent – both conceptually and as legal doctrine – is that children are not savvy enough to sift through the bullshit and arrive at logical conclusions regarding the best course of action for their own safety and wellness.

This is an ancient, foundational concept of civil society– as in, as old as civilization itself.