Every day, the U.S is looking more and more like it will fall short of President Joe Biden's goal to have 70 percent of American adults at least partially vaccinated by July 4.

As of Tuesday, 63.8 percent of those aged 18 and older - about 164.5 million people - have gotten at least an initial shot, according to data from the Centers for Disease Control and Prevention (CDC).

About 16 million unvaccinated adults need to receive at least one dose in the next four weeks for Biden to meet his goal.

But the pace of new vaccinations in the U.S. has dropped to about 500,000 people per day - down from a high of 3.5 million per day in April.

The White House has launched a month-long blitz to combat vaccine hesitancy and a lack of urgency to get shots, particularly in the South and Midwest, but it is increasingly resigned to missing the president's vaccination target. 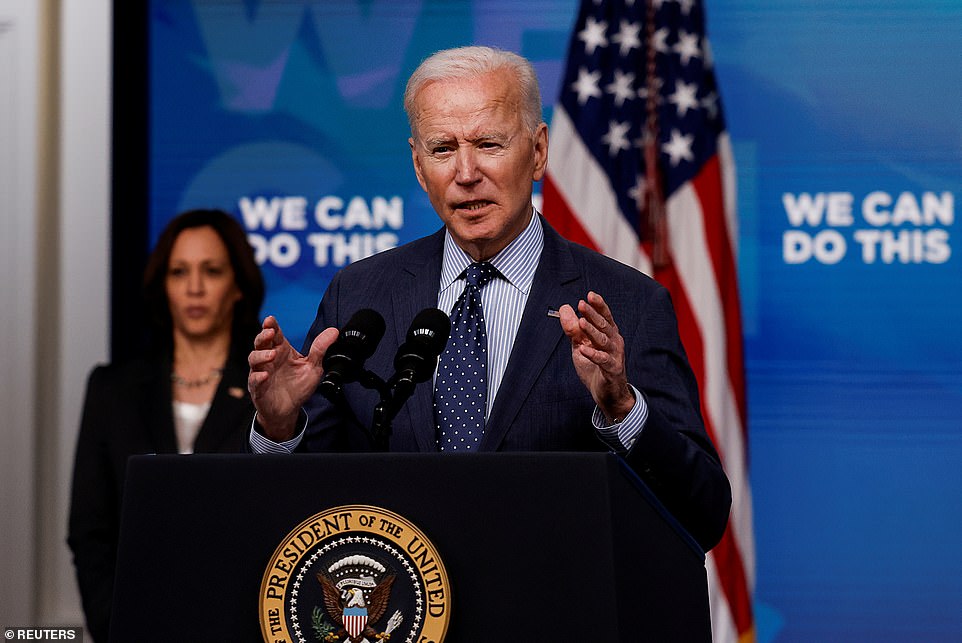 The U.S. looks like it will fall short of President Joe Biden's goal to have 70% of American adults at least partially vaccinated by July 4. Pictured: Biden delivers remarks on his administration's COVID-19 response at the White House, June 2

Biden's administration has insisted that even if the goal isn't reached, it will have little effect on the overall U.S. recovery, which is already ahead of where the president said it would be months ago.

Dr Anthony Fauci, the nation's top infectious disease expert, told reporters at a briefing on Tuesday that he still hopes the goal will be met 'and if we don't, we're going to continue to keep pushing.'

So far, 13 states have reached 70 percent coverage among adults, with about a dozen more on pace to reach the milestone by July 4.

But the state-to-state variation is stark.

Six states, all in the South, haven't even reached 50 percent coverage.

Fauci said the administration is 'pleading' with states, particularly those with low vaccination rates, to step up their efforts in the coming months, though some of the states trailing behind are hardly sharing the urgency.

On a conference call Tuesday, White House COVID-19 coordinator Jeff Zients delivered an impassioned call for governors to join the administration in 'pulling out all the stops' on vaccinations this month.

'We need your leadership on the ground - which is where it matters the most - more than ever,' he said.

In Mississippi, which trails the nation with only about 34 percent of its population and 44.7 percent of adults vaccinated, Republican Gov Tate Reeves has called Biden's goal 'arbitrary, to say the least.'

The vaccination rate in the state has dropped off so sharply that it would take the better part of a year for the state to reach the 70 percent target.

Speaking to CNN on Sunday, Reeves said he encouraged residents to get vaccinated, but that the more important marker was the decline in cases in the state.

That sentiment makes winning over people like University of Mississippi student Mary Crane all the more important to Biden meeting his goal.

She hasn't felt much urgency to get the COVID-19 vaccine because she's already had the virus, and the family she's living with during the summer break has been vaccinated. 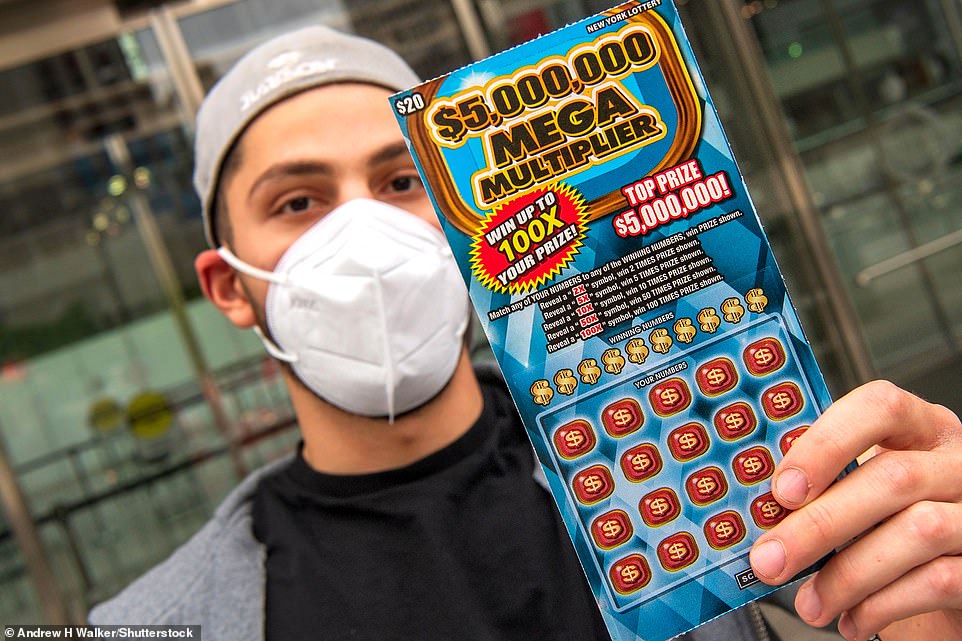 Some states have tried incentives such as offering lotteries to people who get vaccinated. Pictured: New Yorker shows off his lottery ticket outside the NYS Covid-19 vaccination site at the Javits Center, May 24 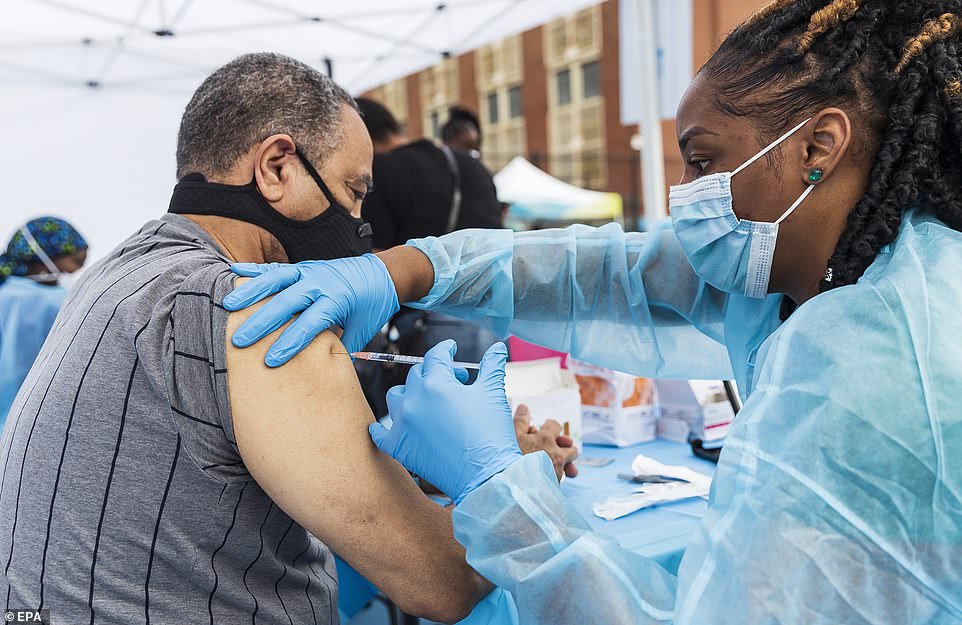 So far, 13 states have reached 70% coverage among adults but six states - all in the South - haven't even reached 50% coverage among those 18 and older. Pictured: Registered Nurse Sheba Phillip (right) administers a COVID-19 vaccine shot to J. Hernandez (left), outside of the Bronx Writing Academy in New York, June 4

'Initially, it was to wait on everyone else to get it and not take a vaccine,' she said, explaining why she hasn't been vaccinated.

Crane, 20, said she's seen classmates who were eager to get the vaccine right away - there was a trend when the vaccine first came out of posting vaccination cards on social media sites like Instagram.

But now that the vaccine has been available for a few months, Crane said she sees fewer young people talking about it.

'Everything's pretty much back to normal now,' she said.

Fauci on Tuesday emphasized that increased vaccination was essential to stamping out potentially dangerous variants, including the so-called Delta variant first identified in India that is now the dominant strain in the UK.

It currently makes up about six percent of all cases sequenced in the U.S.

Vaccines have proven less effective against that variant when people are not fully immunized, and evidence points to it being more transmissible and more deadly.

In Ohio, Republican Gov Mike DeWine created a lottery offering $1 million prizes for vaccinated adults. There was 43% boost in state vaccination numbers after the May 12 announcement before the rates declined again

In an attempt to drive up the vaccination rate, the White House has worked to encourage an array of incentives for people to get shots - from paid time off to the chance to win a million dollars. It's partnered with community groups, businesses and health providers to make it easier than ever to get a shot.

Those efforts have helped sustain some of the interest, but the trends point to Biden missing the target by several percentage points.

DeWine's May 12 announcement of the state's Vax-a-Million program had the desired effect, leading to a 43 percent boost in state vaccination numbers over the previous week.

But the impact was short-lived, with vaccinations falling again the following week.

For some, the chance of winning $1 million isn't enough to overcome skepticism about the need for the vaccine.

Joanna Lawrence of Bethel in southwestern Ohio says the COVID-19 survivability rate is so high, and the experiences of people she knows who took the vaccine are so bad, that she sees no need to risk a shot for herself.

She made it through her own bout of the coronavirus in August.

'My life is not worth money,' said Lawrence, 51, who farms and works in commercial real estate. 'I can always get more money if I need to. I cannot get another life.'

White House press secretary Jen Psaki declined to make a prediction on whether the goal would be met but said the administration was using 'every tool at our disposal to get there.'

'Regardless of where we are on July 4th, we're not shutting down shop,' she said. 'On July 5th, we're going to continue to press to vaccinate more people across the country.'

Husband and wife Keila Moore, 41, and Willie Moore, 42, of Pearl, Mississippi, have disagreed on whether to get the COVID-19 vaccine.

Willie, a frontline worker, said he knew he wanted to get it because he has high blood pressure and other preexisting conditions that put him at greater risk of severe illness and death.

'As soon as I had the chance to get it, I took it,' said Willie, who was vaccinated in February.

But Keila, who doesn't have preexisting conditions and works from home, has so far chosen not to be vaccinated.

After her husband was vaccinated, she tested positive for the virus. She said it was a mild case, but that it was still a scary experience.

Keila said she's feeling more open to getting the vaccine, and is considering getting it this fall, if reports of side effects continue to be minimal.