A federal judge on Tuesday ruled in favor of 17 New York state healthcare workers who object to religious reasons to getting a COVID-19 vaccine.

The judge said defendants, state officials, failed to adequately explain why workers were denied from religious exemptions to a vaccine mandate imposed in August.

“There is no adequate explanation from defendants about why the ‘reasonable accommodation’ that must be extended to a medically exempt health care worker under 2.61 could not similarly be extended to a healthcare worker with a sincere religious objection,” U.S. District Judge David Hurd, a Clinton nominee, wrote in a 27-page ruling. granting a preliminary injunction and allowing the workers to proceed under pseudonyms.

Plaintiffs argued the Aug. 26 mandate issued by the state, or § 2.61, violated their constitutional rights because it essentially forbids employers from taking into account religious accommodations.

Hurd agreed, saying the principal question is whether the state’s mandate “conflicts with plaintiffs’ and other individuals’ federally protected right to seek a religious accommodation from their individual employers.”

“The answer to this question is clearly yes. Plaintiffs have established that § 2.61 conflicts with longstanding federal protections for religious beliefs and that they and others will suffer irreparable harm in the absence of injunctive relief,” he added.

The Thomas More Society is representing the healthcare workers. Stephen Crampton, a Thomas Moore attorney, said the ruling “is very clearly a decision supporting the constitutional rights of these medical workers whose requests for religious exemption to the vaccine mandate were rejected by Governor [Kathy] Hochul and her administration.”

Hochul, a Democrat, said in a statement: “My responsibility as Governor is to protect the people of this state, and requiring health care workers to get vaccinated accomplishes that. I stand behind this mandate, and I will fight this decision in court to keep New Yorkers safe.”

The plaintiffs in the case, a group of business owners and others who work and live in the city, said the executive orders forcing many businesses to require proof of vaccination for entry violated their constitutional rights.

The emergency executive order (EEO), along with two others, mandate that New Yorkers who don’t get a vaccine due to their religious beliefs will be unable to dine out or go to exercise facilities, plaintiffs asserted. It also bars from many establishments those who enjoy so-called natural immunity, or post-infection protection against the CCP (Chinese Communist Party) virus.

Levels of vaccination are much lower among minorities in New York, a bid to get the order blocked also stated.

But U.S. District Judge Brian Cogan, a George W. Bush nominee, rejected the arguments and said he would not impose a preliminary injunction against the order. 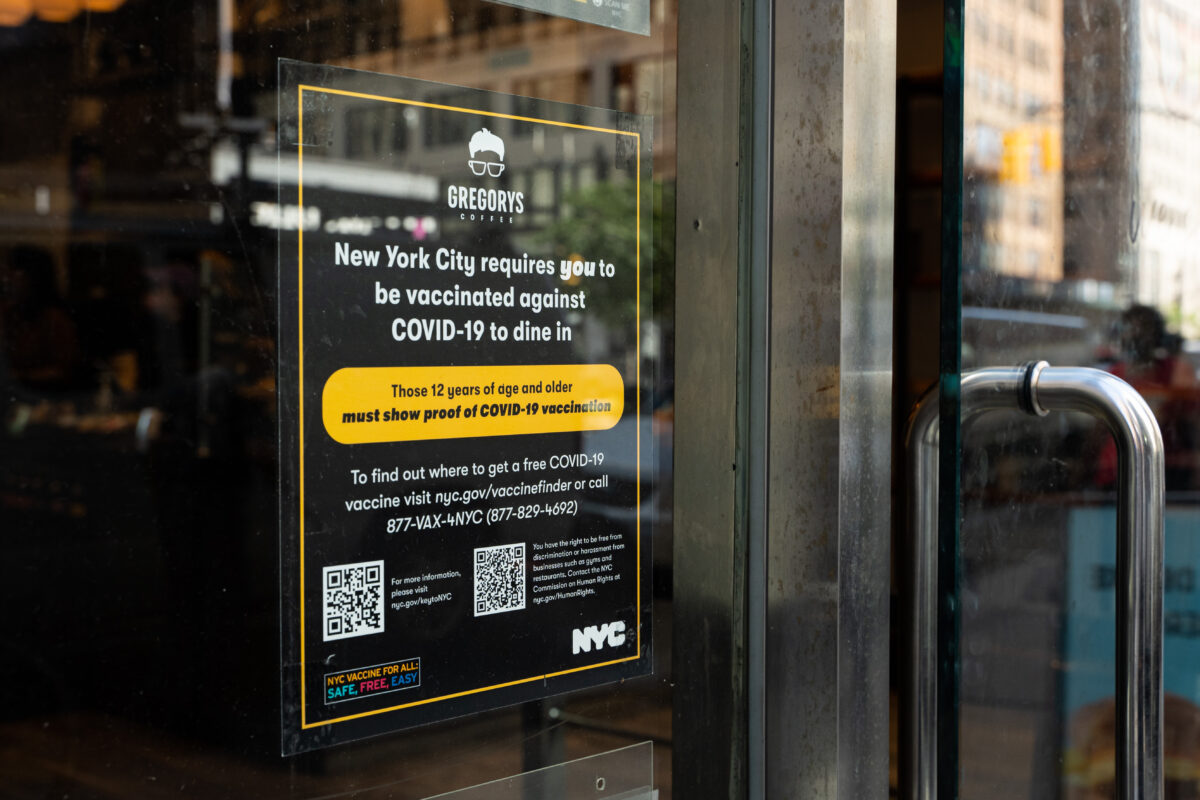 Cogan ruled that the city has “rational justifications” for the orders, including the rise of COVID-19 cases seen after the Delta variant became prevalent in the United States and the increase in cases recorded among people who got a vaccine.

The orders do not racially discriminate or discriminate against certain religions, Cogan added in a 27-page ruling dated Oct. 10 and released on Oct. 12, because they differentiate solely between the vaccinated and unvaccinated.

Additionally, the judge cited the Supreme Court’s 1905 ruling in Jacobson v. Massachusetts in saying people do not have a fundamental right to refuse vaccination.

“This case is even easier than Jacobson because the city ‘does not require every adult member of the public to be vaccinated,'” Cogan wrote, quoting a more recent ruling. “Instead, vaccination is merely required for those who want to obtain or retain access to ‘covered premises.’ Thus, these EEOs are not forcing New Yorkers to get vaccinated. They are merely placing restrictions on those who choose not to.”

Attempts to paint the orders as violating plaintiffs’ rights to pursue a chosen occupation, to raise one’s children, and negatively affect business efficiency were also ruled insufficient by the judge.

“We’re pleased with the decision. Key2NYC is an integral tool to get more people vaccinated and for the city’s recovery,” a spokesman for New York City’s Law Department told The Epoch Times in an email.

Rob DeLuca and Alison Marchese, two of the plaintiffs, told The Epoch Times via email, “While we are disappointed in today’s ruling, we will shortly file a Notice of Appeal, and we intend to fight on all the way to the United States Supreme Court. Our attorneys have raised a compelling argument that every single existing public and private vaccine mandate in this country violates federal statute, among other claims.”

“We ask every patriot to join us by contributing whatever they can on our crowdfunding link. We also ask every restaurant to join IROAR to give us even greater strength,” they added.