Protesters marched through Oxford on Thursday to express their concerns about potential COVID-19 vaccination policy in light of the G7 health ministers’ summit, hosted by the University of Oxford from June 3-4th.

Piers Corbyn, a vocal critic of the UK government’s coronavirus policy and brother of former Labour leader Jeremy Corbyn, spoke at the protest, telling the Cherwell that the protest’s intention was “getting arrests of people who are coercing anyone into vaccination because that is against the Nuremburg code, which includes all these health ministers.”

The Nuremburg Code is a ten-point ethical war crimes code created in 1947 enshrined in UK law by the 1984 Public Health Act, setting out standards that physicians must adhere to when conducting medical research on humans. The first point of the code is that patients must give voluntary consent when participating in medical experiments.  The Pfizer vaccine – the first to be approved by the MHRA – was tested on 43,000 people, with no serious safety concerns being observed. As of June 5, 41.9% of the UK population were fully vaccinated. 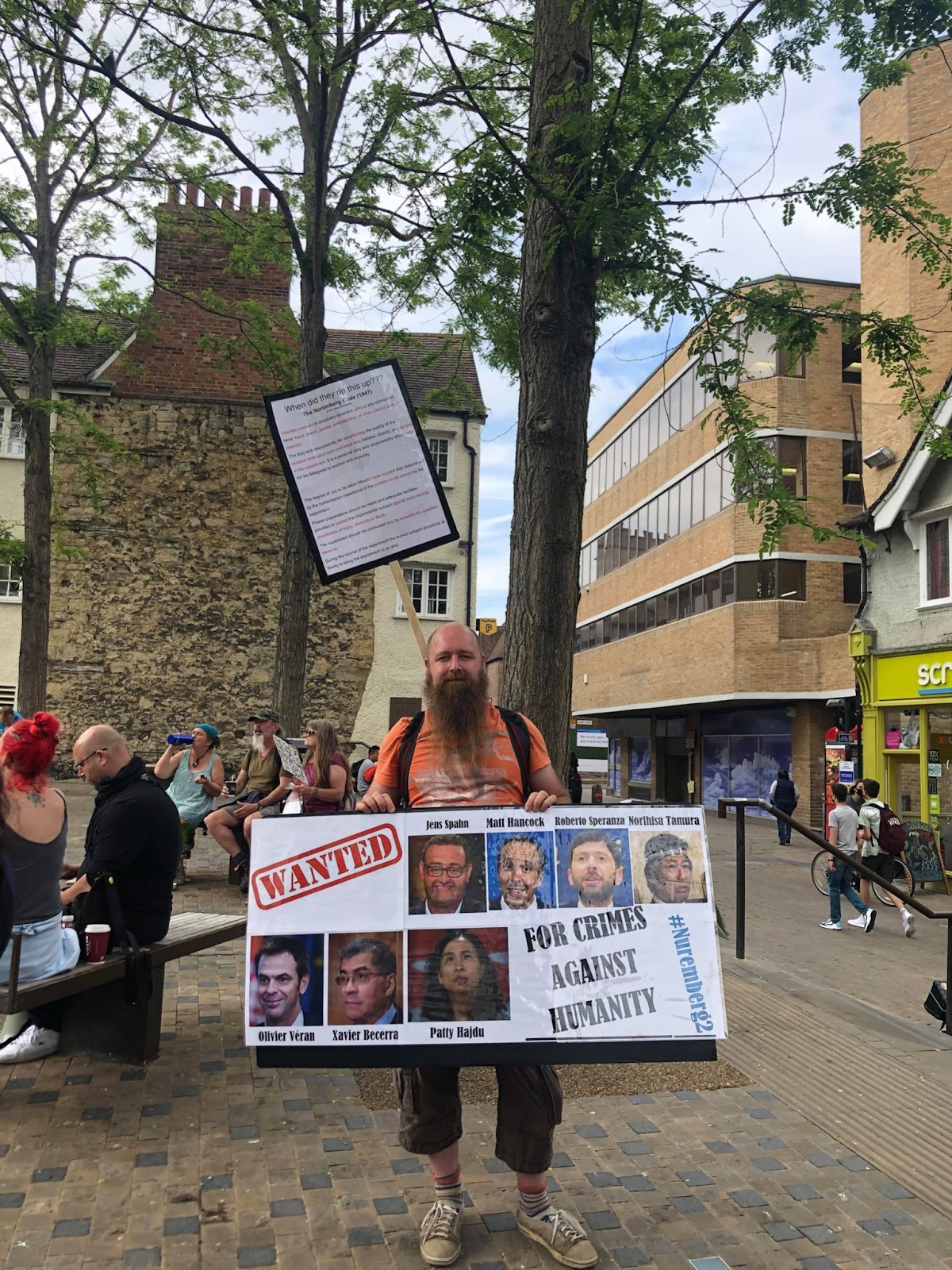 Corbyn said he wanted to prevent the government from “coerc[ing] anybody against their will or without full information into a medical experiment.” Corbyn was arrested in February on suspicion of malicious communications and public nuisance for comparing vaccines to Auschwitz in distributed leaflets. The protest also made comparisons to the Nazi regime, claiming that the G7 health ministers were “war criminals” in violation of the “Nuremburg Code,” and protestors expressing concern that the government would force unvaccinated children to wear “yellow stars” as a method of coercion. 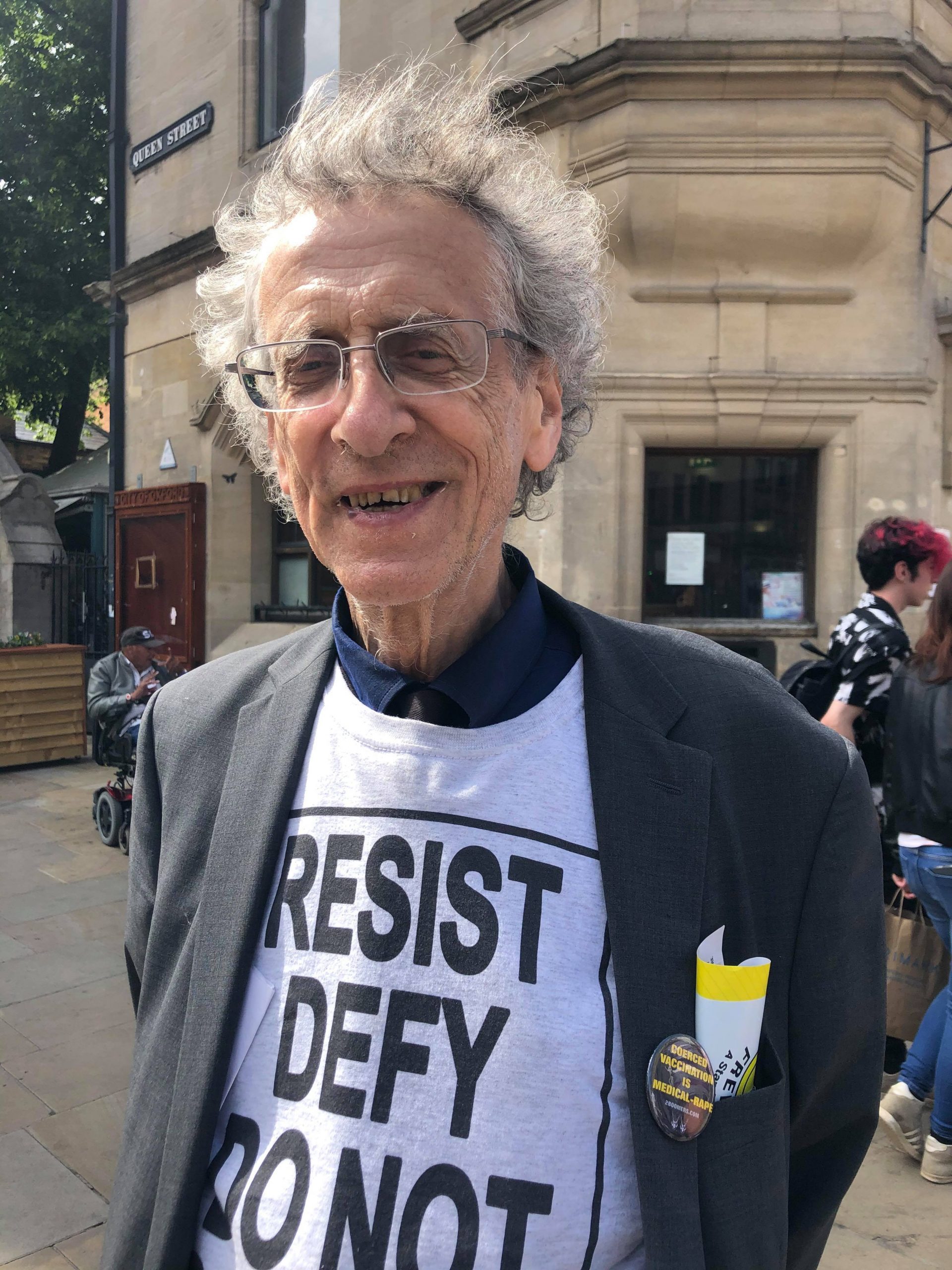 Currently, vaccinated citizens can use the NHS app to show proof of their vaccination status when travelling abroad, however the UK government has acknowledged that arrival countries may still require predeparture COVID tests or quarantines. There are currently no legal requirements for venues to ask for proof of vaccination, however venues can ask for proof if they wish, provided they do not break equality laws. The Prime Minister has previously floated the idea of vaccination passports for pubgoers. However, over 70 MPs have deemed vaccination passports to be “dangerous, discriminatory and counterproductive.”

Some protesters expressed concern about the safety of the vaccine. A man who wished to be known as Dave said he was protesting because “[the G7 ministers] are rolling experimental treatment out, it is not a vaccine by any means, and they are not telling anybody it is still in experimental phases. Most people maybe know that the trials haven’t finished yet and they’re not finishing until at least the end of ‘22 maybe ‘23 but no one is really being told this before they’re being vaccinated.”

The Jannsen vaccine has joined the Pfizer/Biotech, Moderna and Oxford/AstraZeneca vaccines as being approved for use in the UK. Thanks to concerted funding and administrative efforts, these vaccines were able to reduce the waiting times to pass Phase 1, 2 and 3 trials in the space of a year. Pfizer’s phase 3 clinical trial for example, which began on July 27 last year, has had 43,661 participants to date. While the Pfizer vaccine was approved according to the safety protocols, Pfizer will continue to collect data on the vaccine’s safety and efficacy over the next two years.

Protesters were also concerned that patients with vaccination side effects were leaving their symptoms unreported, sharing anecdotes about friends’ vaccinations gone awry. The government has a Yellow Card website where vaccine patients can report symptoms, however, they note that “the nature of Yellow Card reporting means that reported events are not always proven side effects. Some events may have happened anyway, regardless of vaccination.”

Thursday’s protest marched from Cornmarket Street, past the Bodleian and to Mansfield college, where the G7 summit was meeting. The main discussion on the agenda how countries could prepare to boost their future pandemic resilience.Matt Hancock said that “Future diseases that spread from animals to humans are inevitable. The question is how we can be better prepared as a world so it doesn’t have the impact this one has had.” 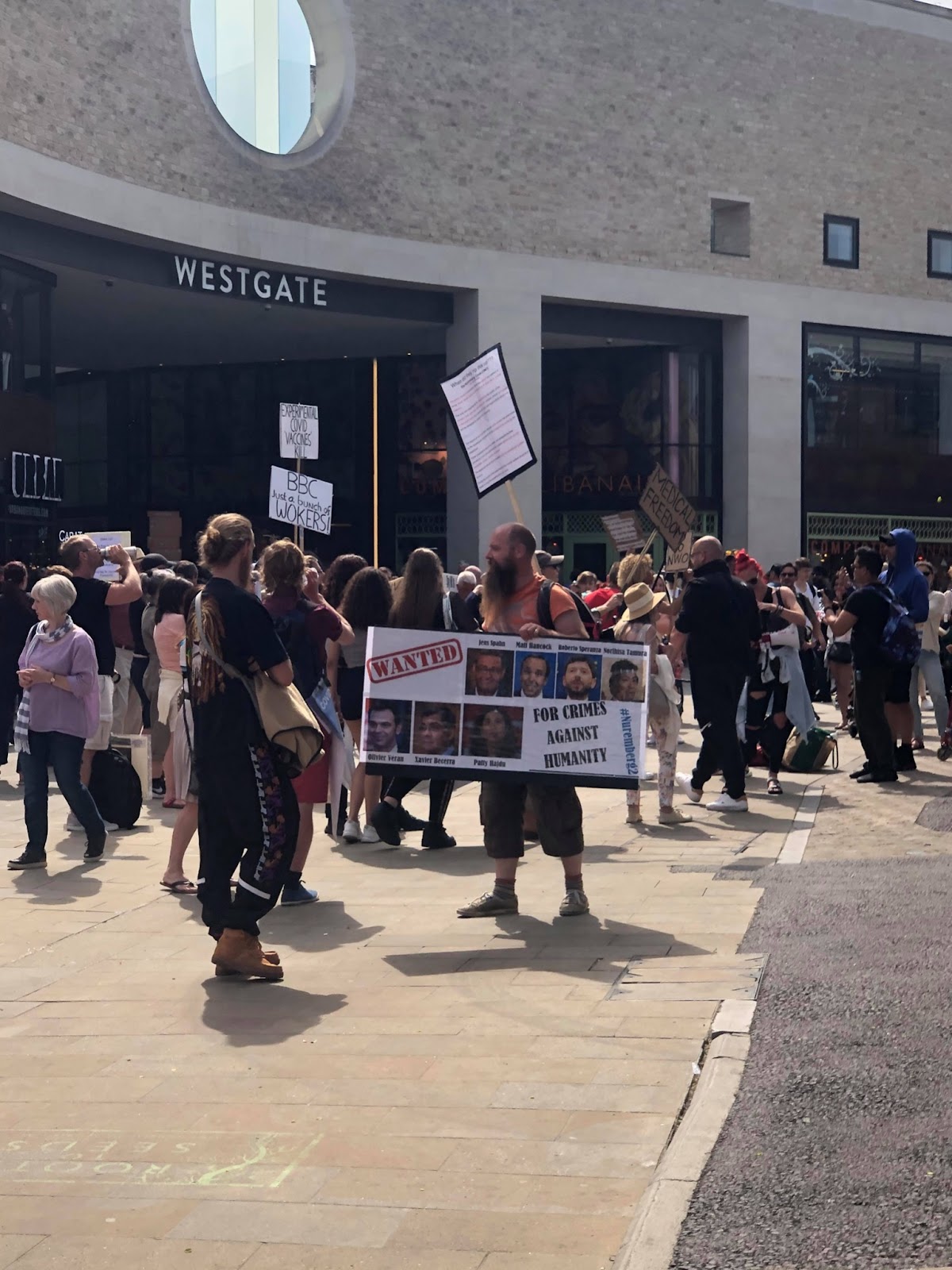 Jennifer Wilson, a finance manager and mother of three, also spoke at the protest, claiming that the government “want to divide us. Look at all the people out here today; black and white, gay and straight, Left and Right, they want to divide us.”

Like most protests, there were many people with various aims. Gurcharan Singh from the Khalistan World Food Programme told Cherwell that “lockdown has played a key part in food shortages.” Singh said that “what the lockdown did, coupled with Bill Gates and his institution, is systematically destroying the harvest.”

Singh’s claims that COVID is “a political agenda” are not alone. Many protestors spoke with mistrust about The Great Reset 2021 agenda set out by the World Economic Forum, claiming at various points that Charles Schwab created the pandemic, the WEF wants to see the destruction of humanity and that the UN was purposely starving nations. Perhaps all these claims can be understood by words from speaker Jennifer Wilson, who shared her frustrated that power was “concentrated in the hands of the very few.”

Several women at the protest held signs inscribed with ‘My body, my choice,’ which has traditionally been used as a slogan used for abortion rights. Corbyn wore a badge that said “coerced vaccination is medical rape.” When asked how they felt about the COVID vaccine being compared to rape, a woman who declined to be named said she thought “it was just as bad.” 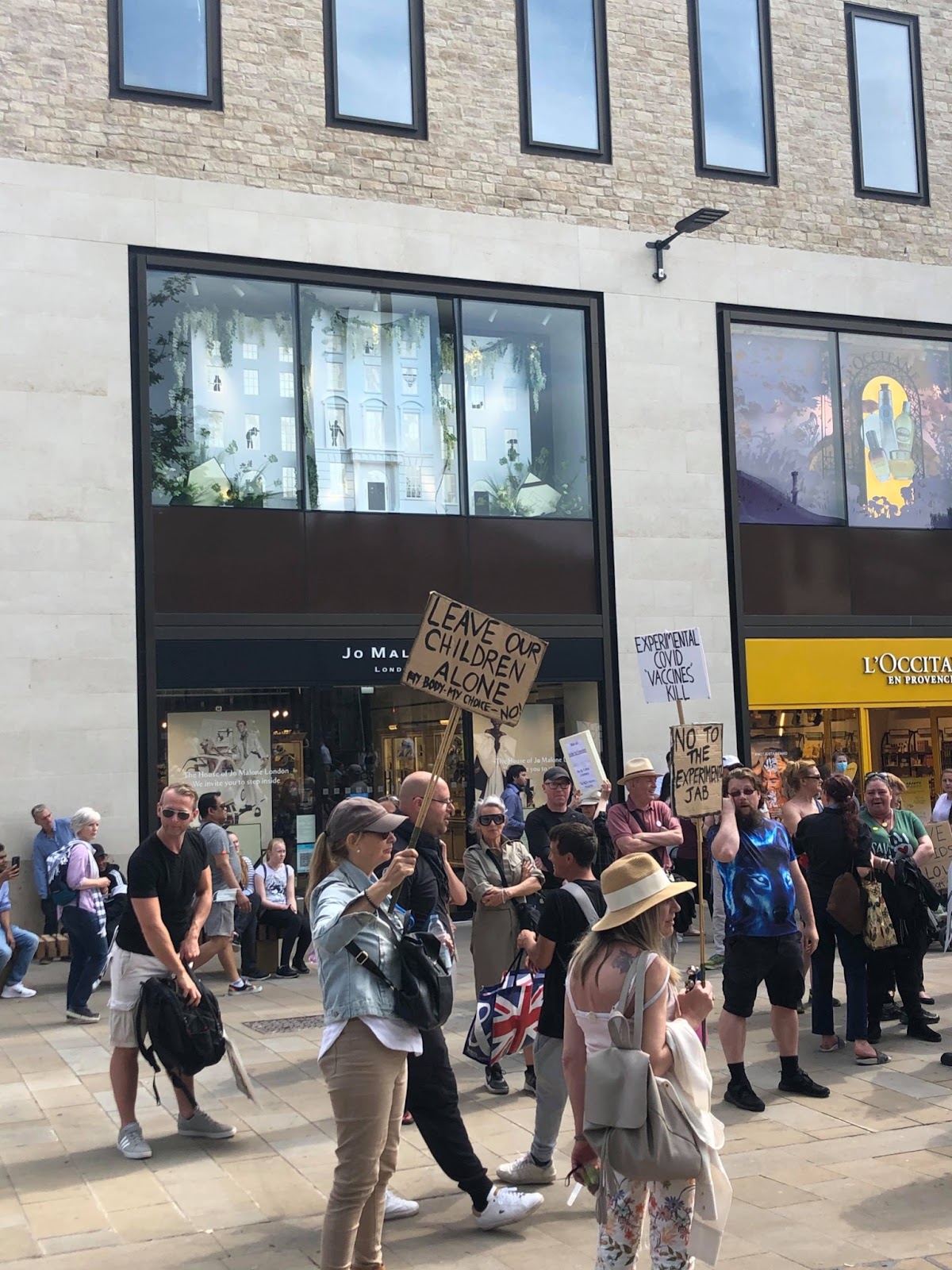 Julie Guest, a member of the UK Council for Psychotherapy who runs her own practice, said she came to the protest to “stand for medical freedom and bodily integrity. Nothing is allowed to enter our body without our informed consent so to be able to give informed consent then we need accurate information, we need the truth, about the impacts of the side effects of vaccination.”