As many as 80 percent of health care workers at some hospitals and nursing homes are refusing or delaying getting vaccinated against coronavirus.

Only about 18 percent of workers at an Illinois veterans' nursing home have gotten their first shots, while nearly all residents at the same home said 'yes' to the jab.

Staff, nurses and doctors in many states remain leery of the vaccines, concerned that there's not enough proof vaccines are safe and reticent to be test subjects.

Hospital and care facility administrators have even tried bribing workers with free breakfast or raffle prizes in an effort to incentivize them to get the shot.

Nursing home staff seem the most reluctant among health care workers - even as higher rates of residents are willing to get COVID-19 vaccines.

It's a worrying trend, especially in states that have inflexible plans for who gets vaccinated first. Health care workers have been put almost universally at the front of the line, and some stats are waiting to offer the shots to other groups until more health care workers are vaccinated.

To-date, just 6.25 million Americans have been vaccinated, according to tracking from Bloomberg News.

At this rate, it could take years for the US to reach herd immunity. In a race against coronavirus, which infecting some 250,000 Americans a day and yesterday killed a record 4,085 people, slow uptake could be deadly. 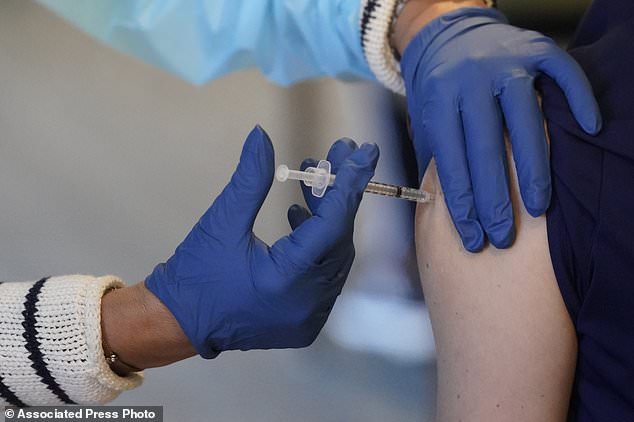 Health care workers say they don't want to be 'guinea pigs'  for COVID-19 vaccination, holding  up rollouts in some states (file) 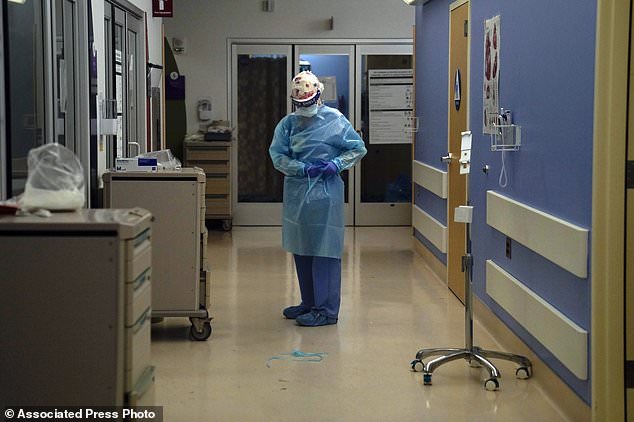 FILE - In this Jan. 7, 2021, file photo, a nurse puts on protective gear in a COVID-19 unit in California. The nation's biggest immunization rollout in history is facing pushback from an unlikely source: health care workers who witnessed COVID-19s devastation firsthand but are refusing shots in surprising numbers. (AP Photo/Jae C. Hong, File)

Health care workers are a surprising source of resistance to the vaccine, given that they have seen firsthand the death and misery inflicted by COVID-19 are refusing shots.

It is happening in nursing homes and, to a lesser degree, in hospitals, with employees expressing what experts say are unfounded fears of side effects from vaccines that were developed at record speed.

More than three weeks into the campaign, some places are seeing as much as 80 percent of the staff holding back.

'I don't think anyone wants to be a guinea pig,' said Dr Stephen Noble, a 42-year-old cardiothoracic surgeon in Portland, Oregon, who is postponing getting vaccinated.

'At the end of the day, as a man of science, I just want to see what the data show. And give me the full data.'

Alarmed by the phenomenon, some administrators have dangled everything from free breakfasts at Waffle House to a raffle for a car to get employees to roll up their sleeves. Some states have threatened to let other people cut ahead of health care workers in the line for shots.

'It's far too low. It's alarmingly low,' said Neil Pruitt, CEO of PruittHealth, which runs about 100 long-term care homes in the South, where fewer than three in 10 workers offered the vaccine so far have accepted it.

Many medical facilities from Florida to Washington state have boasted of near-universal acceptance of the shots, and workers have proudly plastered pictures of themselves on social media receiving the vaccine. 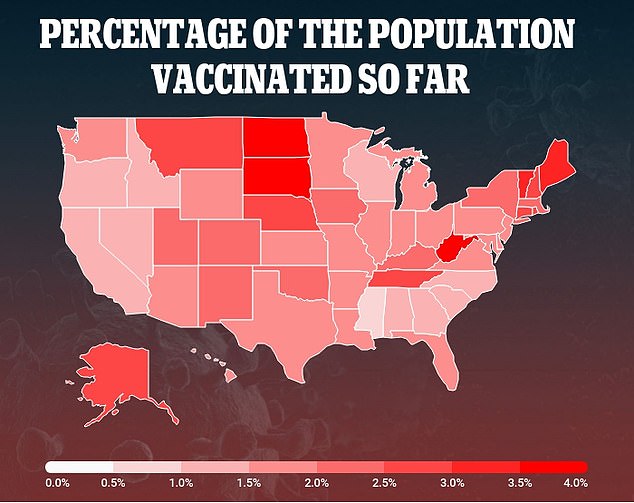 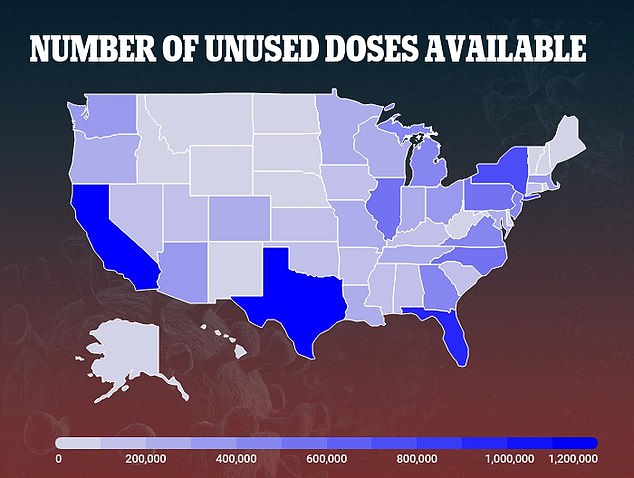 Elsewhere, though, the drive has stumbled.

While the federal government has released no data on how many people offered the vaccines have taken them, glimpses of resistance have emerged around the country.

In Illinois, a big divide has opened at state-run veterans homes between residents and staff.

The discrepancy was worst at the veterans home in Manteno, where 90 percent  of residents were vaccinated but only 18 percent of the staff members.

In rural Ashland, Alabama, about 90 of some 200 workers at Clay County Hospital have yet to agree to get vaccinated, even with the place so overrun with COVID-19 patients that oxygen is running low and beds have been added to the intensive care unit, divided by plastic sheeting. 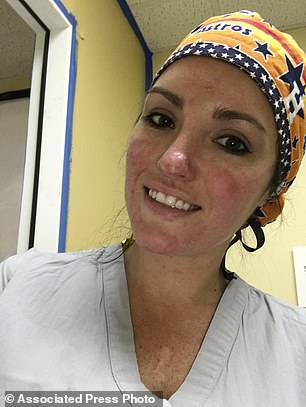 ICU nurse Stormy Tatom, pictured after a 12-hour shift caring for COVID-19 patients in an N95 mask, said she decided against getting vaccinated for now 'because of the unknown long-term side effects

The pushback comes amid the most lethal phase in the outbreak yet, with the death toll at more than 350,000, and it could hinder the government's effort to vaccinate somewhere between 70 percent and 85 percent of the US population to achieve 'herd immunity.'

Administrators and public health officials have expressed hope that more health workers will opt to be vaccinated as they see their colleagues take the shots without problems.

Oregon doctor Noble said he will wait until April or May to get the shots. He said it is vital for public health authorities not to overstate what they know about the vaccines.

That is particularly important, he said, for Black people like him who are distrustful of government medical guidance because of past failures and abuses, such as the infamous Tuskegee experiment.

Medical journals have published extensive data on the vaccines, and the Food and Drug Administration has made its analysis public. But misinformation about the shots has spread wildly online, including falsehoods that they cause fertility problems.

Stormy Tatom, 30, a hospital ICU nurse in Beaumont, Texas, said she decided against getting vaccinated for now 'because of the unknown long-term side effects.'

'I would say at least half of my coworkers feel the same way,' Tatom said.

There have been no signs of widespread severe side effects from the vaccines, and scientists say the drugs have been rigorously tested on tens of thousands and vetted by independent experts.

States have begun turning up the pressure.

South Carolina's governor gave health care workers until January 15 to get a shot or 'move to the back of the line.'

Georgia's top health official has allowed some vaccines to be diverted to other front-line workers, including firefighters and police, out of frustration with the slow uptake.

'That's unacceptable. We have lives to save.'

Nursing homes were among the institutions given priority for the shots because the virus has cut a terrible swath through them. Long-term care residents and staff account for about 38 percent of the nation's COVID-19 fatalities.

In West Virginia, only about 55 percent of nursing home workers agreed to the shots when they were first offered last month, according to Martin Wright, who leads the West Virginia Health Care Association.

'It's a race against social media,' Wright said of battling falsehoods about the vaccines. 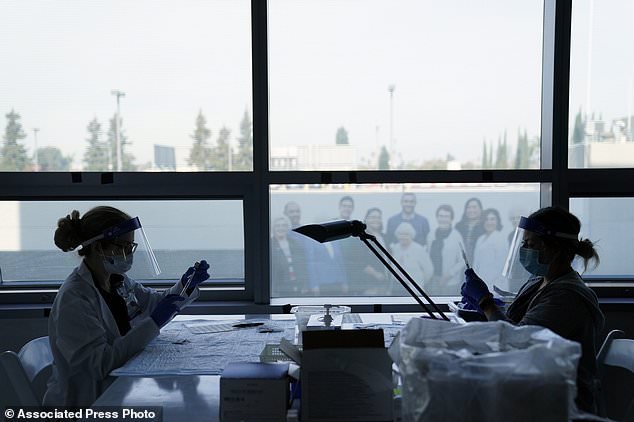 North Carolina's top public health official estimated more than half were refusing the vaccine there.

SavaSeniorCare has offered cash to the 169 long-term care homes in its 20-state network to pay for gift cards, socially distanced parties or other incentives. But so far, data from about a third of its homes shows that 55 percent of workers have refused the vaccine.

Walgreens and CVS, which have been contracted by a majority of U.S. nursing homes to administer COVID-19 vaccinations, have not released specifics on the acceptance rate.

CVS said that residents have agreed to be immunized at an 'encouragingly high' rate but that 'initial uptake among staff is low,' partly because of efforts to stagger when employees receive their shots.

Some facilities have vaccinated workers in stages so that the staff is not sidelined all at once if they suffer minor side effects, which can include fever and aches.

The hesitation isn't surprising, given the mixed message from political leaders and misinformation online, said Dr. Wilbur Chen, a professor at the University of Maryland who specializes in the science of vaccines.

He noted that health care workers represent a broad range of jobs and backgrounds and said they are not necessarily more informed than the general public.

'They don´t know what to believe either,' Chen said. But he said he expects the hesitancy to subside as more people are vaccinated and public health officials get their message across.

Some places have already seen turnarounds, such as Our Lady of the Lake Regional Medical Center in Baton Rouge, Louisiana.

'The biggest thing that helped us to gain confidence in our staff was watching other staff members get vaccinated, be OK, walk out of the room, you know, not grow a third ear, and so that really is like an avalanche,' said Dr. Catherine O´Neal, chief medical officer. 'The first few hundred that we had created another 300 that wanted the vaccine.'